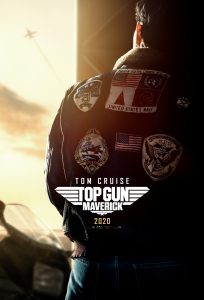 He’s back – and though he’s been busy in the intervening three decades, he’s missed out on a lot of promotions (same, Maverick, same).

Scroll down for the trailer, and footage from Dan Diego Comic Con where Tom surprised the audience: “a love letter to aviation”, he calls the film.

Directed by Joseph Kosinski, this sequel to 1986’s Top Gun is out in 2020, which seems like it should be decades away but isn’t.

Starring Cruise, Jennifer Connolly and Jon Hamm, with Val Kilmer reprising his role as Iceman and Miles Teller as Goose’s son Bradley Bradshaw, this trailer harks back to the sun-drenched first film – though I doubt it’ll be as jingoistic.

(I rewatched Top Gun last year for the first time in years and it’s always interesting watching movies several years on that sum up the decade in which they were made.)