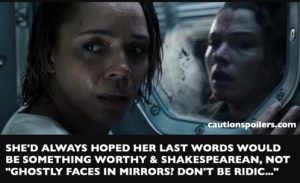 “The path to Paradise begins in Hell”, as everyone who’s been for a Hollywood wax tells me.

We’ve been treated to a new Alien: Covenant trailer to get us through until May 19th when the film is released.

The crew of the colonising ship Covenant have landed on what looks like paradise. Until someone steps in something that looks suspiciously like alien poo.

The trailer is a tense race through probably most of the movie, and it looks terrifying, with athletic yet skeletal xenomorphs coming for the invaders.

I also like that they find the old Engineers’ space ship crash-landed on the planet, like a creepy haunted house.

And we see the Facehugger and the pod that opens and looks like a vagina, hashtag #symbolism.

It’s pretty obvious looking at the aliens that by the time Ripley meets the evolved species in 20 years’ time their DNA is going to be mostly human (then again human DNA is mostly shared with bananas, which means in a parallel universe somewhere Alien Resurrection has a scene with lots of non-EU approved misshapen fruit being grown in a hidden lab which is then blowtorched into a baked fruit salad).

Check out the Alien: Covenant trailer below.