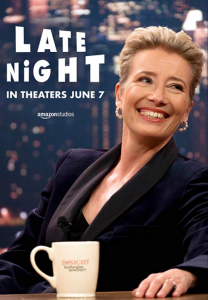 UPDATE, 23 April: New film clip – check it out below

She’s tough on her employees, and doesn’t fall for the old “I’m a man and I need a pay rise because I’ve had another child” line. She also fires people. A lot.

Sadly Katherine’s being replaced at the end of the year, unless the show’s ratings improve.

Her writing room is typically white and male. (Though there’s only one beard around that table which seams a bit unlikely, frankly.)

Enter new writer Molly Patel (Mindy Kaling), who teams up with Katherine to breathe new life into the show, and its host – while having to face down accusations that she was only a diversity hire.

I’ve watched the trailer three times now and honestly, it’s considerably better on a second/third watch. The first time I saw it I wasn’t that impressed. For a comedy-drama it’s light on jokes for a start. But the second time the details (in the performances, social commentary and the movie’s look) were much more apparent.

And the film itself has certainly hit the spot for Amazon, which paid a massive $13 million for the US rights after Late Night premiered at Sundance a few weeks ago.

Kaling also wrote the screenplay and produced. Late Night is directed by Nisha Ganatra, and it’s released in the US and the UK on 7 June.

Make sure you check out the clothes – Emma has a fantastic line in jackets and Mindy’s dresses are very covetable, especially the blue and white one. (I can’t remember what the men were wearing.) Costume designer Mitchell Travers also worked on Ocean’s 8.