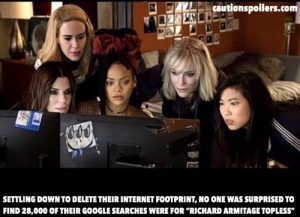 I can’t be the only person watching Ocean’s 8 who thought Rose Weil’s flower-covered paniered frock, presumably based on those rich Regency ladies who liked to play at being milkmaids, was the best Met Gala look.

Played by Helena Bonham Cartier, I mean Carter, Rose is a washed-up fashion designer known for her Edwardian frills and pin-tucks.

Way past her 90s heyday, she’s been reduced to self-financing her latest collection (airline stewardess chic) before Debbie Ocean (a wittily deadpan Sandra Bullock) and Lou (Cate Blanchett) approach her with the answer to her very large financial woes – a jewellery heist to steal a $150 million diamond necklace.

Known as the Toussaint, it’s been in Cartier’s vault for 50 years. But if they can persuade the jewellers to lend it to a Met Gala-going A lister, and persuade the A lister to be dressed by Rose, they have a good chance of snaffling it and sharing the proceeds. And in the process Debbie wants to bring down the art dealer ex-boyfriend who had her sent down.

Debbie is a consummate actress, convincing the Parole Board, after five years inside, that all she wants to do is live a quiet life. Actually as soon as she’s released (in the kind of black lace and sparkles outfit Cher wore to the Oscars back in the 80s) she’s back to her old cons, which – let’s face it – are always enjoyable to watch. (I’ve never shoplifted but now I know if I’m ever in Bergdorf Goodman I can simply select some expensive make-up, take it to the counter to request a refund, act all huffy when they demand a receipt, sigh and say I’ll keep it, then request one of their bags to carry it home in.)

The set up is initially quite fun though it does cover rather more detail than I needed at that stage. Daphne Kluger (Anne Hathaway, sending herself up with buxom glee) a beautiful and highly narcissistic actress, agrees to be dressed by Rose, and wear the necklace.

Meanwhile Lou and Debbie are building their team. Nine Ball (Rihanna, delightfully insouciant) is a top-notch hacker, getting stoned in a big hat while using the utmost precision to hack into hugely complex security systems. Debbie’s friend and fence (a frence?) Tammy (Sarah Paulson) is now, on the surface, a typical soccer mom; but with a garage full of knock-off stuff she tells her husband she buys and sells on eBay.

Amita (Mindy Kaling), desperate to move away from her overbearing mother, is a jewellery wizz who will use her share of the proceeds to finally live her own life. Pickpocket Constance (Awkwafina) can – and will – steal your expensive watch off your wrist in the time it takes you to say “it’s 4’o cl… oh”

Staging the heist at the Met Gala is a genius idea (I really loved Amita’s plaintive request “can’t we just go to this? Do we have to steal stuff?”). The dresses! The cameos, probably including several by people I didn’t recognise! The soup!

And the Gala is gorgeous, glitzy fun. The theme is European royalty, which means beautiful gowns rather than dressing up as a spaceman with a wifi antenna for a headdress (I like to think Debbie’s comment to fellow guest Heidi Klum that her dress was actually old was a nod to our Queen’s sartorial thriftiness, though I suspect not).

Daphne looks incredible in Rose’s shocking pink creation, though it’s taken commitment – admitting, while wolfing down that soup, that she hasn’t eaten in three days. The necklace is jaw-droppingly stunning, not that Daphne would spoil the view of it by dropping her jaw. Now all the team have to do is steal it from her neck without Daphne or Cartier’s security detail noticing, and escape the Gala.

Like so many heist movies it follows a relatively straightforward and familiar trajectory: set-up, the heist with its will it/won’t it go horribly wrong moments, and the post-theft stage where we find out if they’ve genuinely pulled it off.

James Corden pops up at the end as insurance investigator John Frazier, who’s previously taken down Debbie’s brother Danny (George Clooney, seen only in a photograph and as the name on a cemetery vault).

Frazier is alternately highly annoying and rather fun, and his scenes with Debbie follow the same pattern: “five innocent people who are suspects and someone who should be a suspect but isn’t” he says to her in exasperated admiration, as he tries to track down the lost necklace.

Blanchett, looking eerily like DJ and TV presenter Zoe Ball, is the overseer of the heist, though she’s not in it as much as I was expecting. Bullock is terrific as Debbie, happy to continue the family business and with the guts to not just seethe over her (wholly allowable) grudges but also to act on them – going for a “twofer” (“a job within a job”) could easily have been played out as hubris in a woman but she continually holds her nerve.

The direction is sometimes pedestrian. There’s too much set-up. And I couldn’t work out if some of their heist tricks were glaringly obvious or simply acknowledging that men are, in fact, simple creatures. Sudden problems are too easily solved by a newly-appearing minor character, when it takes me weeks to get a plumber.

But ultimately Ocean’s 8 is a buoyant ride; whose A-list cast give witty and vibrant performances which support each other’s characters as much as showcasing their own.

Debbie’s motivations for stealing the necklace seem to be two-fold: revenge (not a complaint, he totally deserves it); and, like Mallory’s famous justification for climbing Everest, because it’s there. And really, what more do you need?

“A him gets noticed, a her gets ignored” she comments, as they’re building an inconspicuous all-women team, though that could never happen with these women. The only male character with any real presence (apart from the dead Danny) is Debbie’s ex-boyfriend, art dealer Claude Becker (Richard Armitage) who is suitably deserving of our combined wrath while also being the object of my female gaze.

Ocean’s 8 has taken some stick, often undeserved. But as Lou coos to Rose after the designer has read out a particularly nasty blog post about her fashion show “That’s very cruel but it doesn’t make it true” (and remember that if I’m ever mean to you).