You are here: Home / Trailers / “Late Night” gets better and better… 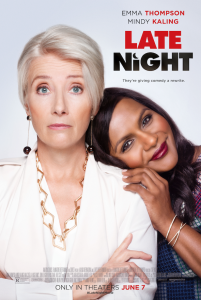 For us (this second trailer is better than the first), and for chat show host Katherine Newbury (Emma Thompson) – when she takes on inexperienced writer Molly Patel (Mindy Kaling) to rescue her sinking ship.

Katherine isn’t just a chat show host, she’s the reigning monarch of chat show hosts, and winner of an extraordinary 43 Emmys. (Is that even possible? I’m British and generally if you win more than one of something you’re supposed to put the next prize back, like at a church fete raffle.)

But the show isn’t funny any more, and viewers are falling off a cliff (not literally, she’s not that bad). In a world moving towards inclusivity, Katherine’s all-white, all-male, all-privileged writing room is letting her down. This is her last season if they can’t turn it around.

The first trailer didn’t really grab me (though it improved on re-watches). This is much funnier, and gives a better idea of what the women are up against and how they plan to save the show.

Late Night is written by Mindy Kaling and directed by Nisha Ganatra. It’s out on 7 June in the UK and the US.

Here’s the second trailer (watch the original trailer and a clip from the film here):