You are here: Home / Trailers / Oooh, cutting – the Knives Out trailer is here 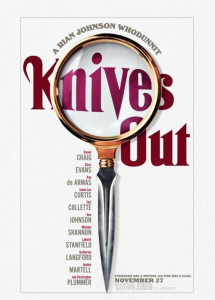 *** read my 4-star review (it doesn’t tell you whodunnit because Rian Johnson requested it!) ***

UPDATE 19 Sept: the final Knives Out trailer is here.

From writer-director Rian Johnson comes the first trailer for Knives Out, his modern day homage to the whodunnits of Agatha Christie. It has all the ingredients: a spooky house, a drawing room of seething relatives who hate each other, a dead patriarch and a patronised detective.

Everyone is a suspect, probably even you! (To be fair you look a bit shifty.)

It looks a blast: funny without being too slapstick (I’ll admit when Daniel Craig’s inspector Benoit Blanc says he suspects foul play I was half expecting a chicken to appear, though there is a KFC joke).

Not much happens apart from simmering family rage, and Chris Evans (going by the fantastic name of Ransom Robinson, but who should hitherto be known as Handsome Hobinson) telling most of his family to “Eat shit”, which will no doubt become the meme of the year in these difficult times.

I love these kinds of murder mystery films, and I love Agatha Christie (my dad was a huge fan, and in fact yesterday I went out for dinner and had potted shrimp as it’s the kind of thing Poirot eats in dreary posh restaurants in the books. It was disgusting but never mind).

Knives Out also stars Toni Collette, Ana De Armas, Don Johnson, Michael Shannon and Jamie Lee Curtis as various lip-curling family members, with Lakeith Stanfield is Detective Troy Archer. It’s out on 27 November in the US and 29 November in the UK.