You are here: Home / Trailers / Gerard Butler’s “Keepers” Reappears As “The Vanishing” In New Trailer

I’ve always liked the idea of living in an isolated lighthouse for some peace and quiet, plus I’m the only person I know who loves big lights.

Now, though, I think I’d refuse to go without 300 Spartan soldiers to protect me – after watching this trailer, which manages to be both eerie and violent (and a bit snuggly too).

The original title, Keepers, brought to mind a footie film, and the new one makes it sound like all the other films called The Vanishing, of which there have been several. 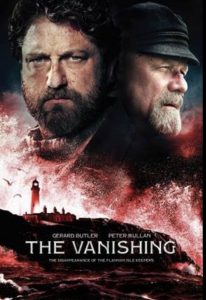 The film is based on the Flannan Isle mystery when three lighthouse keepers disappeared in 1900 and were never seen again, leaving the table set for dinner. So combined with that new title I think we can rule out a happy ending.

In the trailer the three men head to the island for their six week stint, and find a chest of gold bars. Unfortunately someone wants it back…

The Vanishing stars Gerard Butler, Peter Mullan and Connor Swindells as the lighthouse keepers; it’s directed by Kristoffer Nyholm. The film opens in selected US theatres and on demand in early January; IMDb has a UK release date of March 2019. Check out the trailer below.