You are here: Home / Trailers / 3rd trailer for Hobbs & Shaw – and check out Brixton on his bike 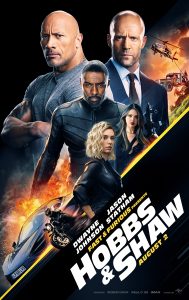 The last trailer focussed as much on funny (imagine if Bill and Ted did John Wick), though now we’re firmly back in fast and furious territory.

There’s a big family theme in this movie, with Luke Hobbs (Dwayne Johnson) roping in all his brothers, and Deckard Shaw (Jason Statham) forced to work with his very clever sister Hattie (Vanessa Kirby).

Rogue MI6 agent Hattie has stolen a virus from “Black Superman” Brixton (Idris Elba), a genetically-enhanced, cyber anarchist – and he wants it back.

In addition to the trailer there’s also a new poster, though it’s a bit dull – with Jason Statham looking like he works in insurance and doesn’t believe your story about how your new car was written off after an incident involving next door’s guinea pig, and Dwayne Johnson as your neighbour wanting to know what the hell happened to his daughter’s guinea pig. 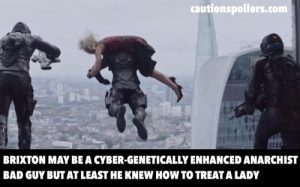 Sadly, contrary to earlier rumours, Keanu Reeves is not in this movie (there were suggestions he’d play Brixton’s even eviler boss in a mid-credit sequence but apparently that’s not happening).

Idris is more than enough though, and if you want to know why we go for the bad guys so often, just check out Brixton’s motorbike skills in the new trailer.

Watch the new trailer below (if you missed the first trailers, catch trailer 1 here and trailer 2 here. They also released a bunch of character posters earlier this year.)