You are here: Home / Trailers / Hey dude! Watch the new trailer for Yesterday 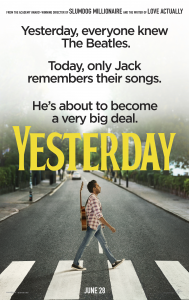 What would you do if you woke up after a bike crash to discover that The Beatles never existed and you knew all their songs? You’d become the world’s greatest-ever singer-songwriter, that’s what. Aided and abetted by Ed Sheeran, of course.

When I say aided and abetted, I mean thwarted, when he suggests to Jack, our strumming hero, that actually that particular song would sound better with a slightly different title – maybe “Hey Dude”?

Most of Jack’s friends are amazed at his new-found abilities, though not everyone: “Well, it’s not Coldplay. It’s not Fix You” says one, crushingly.

Soon he’s off round the world with Kate McKinnon as his hard-as-nails music publisher.

And sorry James Corden haters but he pops up too. While Jack’s girlfriend (Lily James) sits at home wondering if she’ll ever get him back.

I honestly laughed all the way through this trailer – it looks like a totally feel-good movie with some great lines, driven by Jack’s bemusement and guilt at what he’s doing: “Sometimes it feels like someone else has written all the songs,” he tells a gushing press reporter, truthfully.

And the soundtrack’s not bad either.

Himesh Patel, who plays Jack, is incredibly winning, as he comes to terms with (a) being famous and successful and (b) the fact that no one, genuinely, has ever heard of The Beatles, and it’s not a huge joke being played on him. And who hasn’t felt out of kilter with life, that everyone else is living in a slightly different planet to them?

Yesterday stars Himesh Patel, Lily James, Kate McKinnon, Ama de Armas and is directed by Danny Boyle – with a script by Richard Curtis. It’s out on the 28 June in the UK and 13 September in the US.

By the way I am now listening to Hey Jude, Yesterday and Let It Be on repeat.

Watch the trailer for Yesterday: