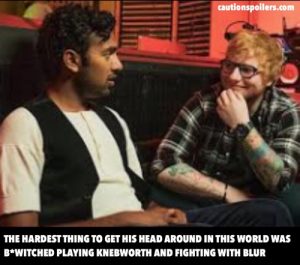 Jack Malik, unsuccessful at both singer-songwriting and love, is cycling home one night though his Suffolk hometown when the electricity fails across the world for 12 seconds and he’s hit by a bus.

It’s a calamity for Jack (Himesh Patel), though it doesn’t seem to affect anyone else much, who see it as a jokey quirk and then forget about it. But when he wakes up in hospital, it’s to a world missing two of his teeth, knocked out in the crash, and The Beatles.

References about her looking after him when he’s 64 are met by eternally friend-zoned Ellie (Lily James) with bemusement; his rendition of Yesterday for his mates once he’s out of hospital with astonishment and awe.

Patel does a good line in bafflement, waking up to find out The Beatles never existed. (The nearest I can come to is my mum having a stroke in 1962 and missing the Cuban Missile Crisis. She was a stickler for grammar so I guess if she’d come round in a world where the apostrophe hadn’t been invented she’d be as unnerved as music obsessive Jack.)

The main issue with Yesterday, though, is that the implications of its central disruptive and clever idea aren’t explored to any great degree; like the electricity outage, that idea feels like a footnote. So beyond bafflement, occasional flashes of anger, and guilt over claiming credit for Lennon and McCartney’s back catalogue as Jack rises to fame, Patel (a charming and winning lead) doesn’t have much to get his remaining teeth into.

In a film about success and stardom without authenticity, this certainly hits the spot, though probably not in the way intended. It’s entertaining enough; think reliable whimsy, with a reliably excellent soundtrack. But it’s also by-numbers, and at an hour 50 does drag in the middle. Like the elusively perfect three-minute pop song, this would have been better as a sharp 90-minute movie with more bite and fewer surprised expressions.

The Fab Four aren’t the only cultural icons missing from this brave new world, and it’s quite fun wondering what else was never invented (or just never caught on). When someone’s phone rang in a pocket I was intrigued to see if it was an iPhone, or whether the other Apple had gone the same way as John, Paul, George and Ringo’s record label.

Coke is nowhere to be seen so Pepsi rules supreme, though in a British film I’d have preferred Panda Cola to have emerged top dog. And, with no Beatles, there can be no Oasis (and no feud with Blur).

When Jack isn’t playing his new songs, or googling like mad to see what else is AWOL, he’s desperately trying to write down Beatles lyrics before they’re lost to the universe forever, which is harder than he expects (luckily Post-Its have been invented).

I like that even channelling Lennon and McCartney, success doesn’t come too easily for Jack; not everyone thinks he’s an instant genius, in fact hardly anybody does, and he still has to work the sofas of local TV news shows to get noticed.

But Ed Sheeran hears him, and soon Jack is supporting him on tour in Moscow (I was actually interested in how they would deal with this – in Jack’s new world did the USSR ever exist? It turns out it did, though just as in the real world, I expect only the Russians remember).

Then he’s whisked to LA, a mega-album in the offing after the usual around-the-world shots of social media influencers getting incredibly excited. (How Boyle presents the clips is more interesting than the usual montage.)

In this weirdly off-kilter world, once he gets to California our strumming hero is told he is both unattractive and out of shape – “skinny yet somehow round” his awful new manager Debra (Kate McKinnon, having a ball) calls him. Actually Jack is handsome and has an excellent body, so I’m not sure whether this is meant to be “no Beatles”-level unbelievableness, or simply the difference between standards of beauty in LA and Suffolk.

There isn’t really a villain, unless you count Ed Sheeran changing Hey Jude to Hey Dude, and yes jail him now.

A bigger let-down is the script, which doesn’t properly examine the implications of its premise, particularly around the cultural significance of The Beatles (Noel Gallagher’s lack of galvanising musical influences notwithstanding), or Jack’s speedy songwriting (instant classic after instant classic) when for any band or musician with longevity, style and direction evolve over time. Sheeran touches on his protege’s astonishing writing abilities, and Jack is occasionally asked about the meaning behind particular songs, but it’s very light-touch.

Jack’s eventual response to his passing off other people’s work as his own is bizarre yet apparently cheer-worthy – without spoilering too much, they aren’t his songs to decide what to do with.

Lily James is sweet but rather wasted as Ellie, the school teacher/manager who has always loved him, wears her hair in quirky side-buns and lives in tea dresses and cosy pyjamas. Their will they/won’t they relationship follows the expected trajectory, though I wasn’t particularly engaged about whether they’d get together. The most entertaining characters are Rocky (a touching Joel Fry), Jack’s dope-smoking loser friend, and the enjoyably dreadful Debra.

Rocky’s amiable but directionless existence is given real purpose by Jack’s meteoric rise to success. Debra is so blunt she makes a butter knife look like Excalibur. She’s horrible – really horrible! – and brutally honest to an unnecessary degree. And in a film of sweet fluff she’s desperately needed, a tart palate cleanser bursting out of a light-as-air supermarket angel cake.

The script has some clunkers – how much talk of miracles do we need, before a sort-of miracle? And my heart sank a little when, only a few minutes in, Ellie gets pre-bus crash Jack a slot at the Latitude Festival, only for the tent he’s performing in turning out to be… well I’m sure we can work it out, can’t we.