You are here: Home / Trailers / Frozen II trailer: the past is not what it seems 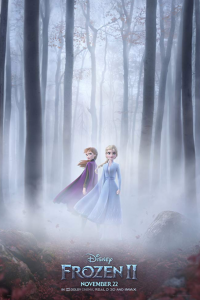 “We had always feared Elsa’s powers were too much for this world. Now we must hope they are enough”.

Frozen is going big this time, with Elsa on a journey north “across the enchanted land and into the unknown”.

And she’s suitably dressed, as I’m from the north and I can confirm no one ever wears a coat.

(If you missed the teaser from February watch it here and check out images from the film and recording).

Frozen II is directed by Chris Buck and Jennifer Lee. Returning are Idina Menzel as Elsa, Kristen Bell as Anna, Josh Gadd as Olaf and Jonathan Groff as Kristoff. New to this sequel are Evan Rachel Wood and Sterling K Brown. The film is released on 22 November.