You are here: Home / Trailers / Finding Your Feet Trailer: Retiring Isn’t All Twinkle And No Toes 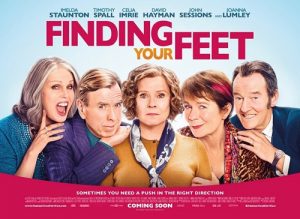 When posh and snobbish Sandra discovers her husband has been getting his leg over with her best friend, she heads to the inner city to stay with her freewheeling, bohemian sister Bif.

There’s a huge culture clash between the two women, but it’s when Bif takes her sister along to her community dance class and introduces her to friends Jackie (Joanna Lumley – the woman I want to recite my autobiography audiobook should I ever become famous enough and interesting enough to write it), Ted (David Hayman) and Charlie (Timothy Spall) that things really heat up.

While some of the dialogue is cheesy enough to be sold at my local Waitrose deli counter (“it’s one thing being scared of dying, it’s a whole different matter being scared of living”), on the whole the trailer looks great fun and yes I’ll probably cry when I finally see the film.

Also how fantastic to have more films aimed at older age groups than mine, so I don’t feel quite so past it.

Finding Your Feet has already won the Audience Award at the Palm Springs International Film Festival and is released in the UK on 23 February 2018.

Sandra is played by Imelda Staunton and Bif by Celia Imrie, and the movie is directed by Richard Loncraine. Watch the Finding Your Feet trailer below.