You are here: Home / Film Reviews / Finding Your Feet 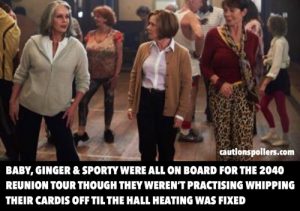 This is a film of two halves – the first is bright and brilliantly funny with lines delivered to perfection by some of our greatest thespians, and touches on themes much grittier and darker than I expected.

The second half is less funny and follows a familiar path; at times even the sadness feels like a deliberate attempt to manipulate us with its sad-movie tropes. The supremely talented cast still lifts it, but by the end I found myself hoping people would expire rather quicker than they did.

Lady Sandra (Imelda Staunton, adding complexity to a character easily dismissed as Hyacinth Bucket with money) discovers her husband, retired Chief Constable Mike (John Sessions), has been having an affair with her friend; just as Sandra is looking forward to spending time together in retirement.

Storming out, Sandra heads to her sister Bif’s London council flat, a temporary stay until Mike comes to his senses.

It’s a presumptuous decision; she and Bif (Celia Imrie) haven’t seen each other in years, and each disapproves of the other’s life choices. But after a scrappy start, they remember they’re friends as much as sisters.

I know, I know, it sounds trite, but refreshingly their sibling relationship is less straightforward than it first appears.

For a start, dope-smoking, mismatched-clothes wearing Bif is the unconventional free spirit, when she’s the older of the two – usually they’re seen as more conformist. And she’s sometimes arrogant about her life choices compared to her sister’s. It also turns out that Sandra isn’t the only one rueing missed opportunities over the years.

Bif has a close circle of friends, and these other friendships give an external structure to Bif and Sandra’s initially tricky relationship.

Charlie (Timothy Spall) is a fixer of things, and keeping busy stops him dwelling on his wife’s illness. It’s genuinely distressing watching such a bear of a man having to decide whether visiting his wife Lily, who has Alzheimer’s and is in a nursing home, is helping her, or making what’s left of her life more stressful.

Ted (David Hayman), another barge-dweller, has lost his wife and while he’s coping, it doesn’t take much to plunge him back into that tarry pit of grief. (His friendship with Charlie is beautifully portrayed.)

I’m not sure if Joanna Lumley is playing Jackie or Jackie is playing Joanna Lumley; either way, Bif’s much-married friend is rather wonderful, grey-haired and unable to look anything except glamorous despite her loose black trousers and comfy cardigan.

Jackie is back on the scene after marriage number five broke up (“it ended over religion. He though he was god, I didn’t”; a line which I didn’t really rate, but which had the older audience I saw this with risking a collective mirth-induced stroke).

Though I did love her description of an online dating experience, when he turned up with his wife after Jackie erroneously ticked “swinging” rather than “swimming” in her profile. Jackie’s also a source of advice for Sandra over the divorce, Sandra being a whopping four marriages behind her.

Bif too is dating, bringing the elderly Gerald home after a night out, and dancing for him in her living room to get him in the mood. He’s come prepared – “30 minutes and I’ll be good to go!” he says gleefully, waving his tablets, to which Bif retorts “I’ll get you there in 10!”. Sadly for Gerald time is even more of the essence than Bif realises. What a way to go, though.

Sandra’s attachment to certain physical items – she is rarely out of her classic cream blouse and even more classic camel wool coat (10 year old Jaeger, I’m guessing) – presumably helps her retain some kind of control as her life spins away from her. But as the disruption slows, and she gets her bearings, the old (or rather, young) Sandra starts to reappear.

Eventually she agrees to go to Bif’s dance class, and it looks great fun. Though as church hall pianos make me break out in a cold sweat remembering my inability to grapevine during ’80s aerobics sessions, and whose last dance floor escapade involved shuffling round a sticky floor to some depressing Britpop guitar band (hi, Embrace!), I’m probably not the expert you require.

It does reignites Sandra’s love of dance, and proves to herself and others that she has expertise in something.

Films about older people often have illness waiting in the wings, and this is no exception. It’s an easily spotted plot line, paradoxically making the second half less involving. (When I’m old I shall be mostly watching movies about living forever, such as The Man With Two Brains.)

Staunton is, as you would expect, impressively raw, Sandra’s initial appalling rudeness later giving way to terror at an unknown future. (Staunton is tiny, and Bif’s council flat is so weirdly proportioned – very high radiators, very high windowsills – at one point as she stands in an empty room the perspective means it looks like a grittier, British version of Downsizing.)

Celia Imrie’s comic timing is superb, raising one-liners from good to great (and several are great to start with). And you certainly couldn’t accuse her of phoning in her performance, not least because even once Bif buys a phone she never knows where it is, tending to leave it in the tumble dryer.

Timothy Spall is the only British actor for whom we critics are legally allowed to use the sobriquet lugubrious, making him our very own John Goodman. He’s very affecting, as Charlie risks opening himself up to yet more potential sadness after internalising his grief for so many years.

A more diverse central cast would have been interesting. And I wasn’t impressed with the round of applause from pub-goers for Sandra when Pamela gets her comeuppance. Save your venom for Mike and their annoying daughter!

The sets are believably imperfect; this isn’t The Golden Girls. Bif’s flat is properly chaotic, rather than yesterday newspaper on the floor and a solitary scarf draped artfully on the sofa. Charlie and Ted’s barges seem to be held together with string and mismatched screws, and Charlie’s van by sheer goodwill and a couple of window stickers.

I’m not going to come up with a metaphor about what’s holding Finding Your Feet together (actually I tried but I got stuck on slightly sticky Werther’s Originals that have been in a donkey jacket pocket for six months).

It’s a well-made film with a cracking first half, that examines many issues affecting older people. I just wish the second half had been as sparkling (then again I’m 46, and desperate to believe that second halves just get better).

buy / rent finding your feet on vod or buy the dvd or blu-ray from amazon.com

[The film includes a well-deserved plug for British charity Age UK. If you’d like to donate to Age UK or find out more about their work, check out their website here]

Watch the Finding Your Feet trailer: