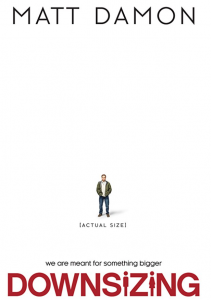 Downsizing could have been a burning satire on social save-the-planet activism being twisted to support the newly idle, newly rich. But instead it becomes an apocalyptic tale about the power of love.

Which is all very well but has nothing to do with being small, apart from only needing an ark from Toys ‘R’ Us.

An hour long four-star movie followed by an hour long two-star movie, Downsizing is initially corruscatingly biting, then fizzles out.

Initially it has a magnetic pull, its premise comfortingly familiar (who hasn’t weighed up the practicalities and romance of miniaturisation when reading The Borrowers or Gulliver’s Travels?) yet scarily out there. But then come a whole new batch of questions and answers, spinning in different directions.

There’s still a lot to recommend it. But Downsizing can’t maintain that initial excitement, wonder, and indeed cruelty.

Norwegian scientists have discovered how to reduce animals and people to only a few inches. And with the breakthrough coming from socially-aware Scandinavia, this isn’t one of those experiments they do because they could, without ever thinking whether they should.

The scientists, led by Dr. Jorgen Asbjørnsen (Rolf Lassgård), very much think they should, after their institute decides that overpopulation poses the biggest threat to Earth’s survival.

Announcing their discovery at a conference, they introduce the first tiny pioneers to loud applause. But almost as exciting to the audience is the third-full bin liner, representing all the tiny colony’s waste from four years. (Something my recycling-obsessed local council is probably planning, but without shrinking us first.)

Several years later, occupational therapist Paul Safranek (Matt Damon) and wife Audrey (Kristen Wiig) are discontented and unfulfilled. Audrey is a bit of a moaner: “let me take all the weight” says Paul, massaging her neck, and that seems to be his entire marital role. With no chance of affording her dream house, and after a heart-to-heart with a 5-inch friend perched on a cereal box on the kitchen counter, Paul pushes for them to downsize.

The (irreversible) process already has a coldly clinical, conveyor belt feel, as hair is shaved off, tooth fillings are removed, and bodies on white trolleys are lined up in a white room by white-clad orderlies and nurses. After treatment and a few hours’ recovery, they are ready for Leisureland, their new luxury community.

I say they, but Audrey has got cold feet and remains full-size, phoning Paul from the airport as he recovers. Her determination to play victim in the face of his fury is one of the funniest scenes, though to be fair Paul’s railroading of her into shrinking was obvious. She then disappears, never to be seen again.

The downsizing process is fascinating; it can be hard to prevent that kind of set-up detail becoming the most interesting aspect of a sci fi film, and it’s fair to say that Downsizing‘s story doesn’t really match up to the why and the how.

Once Paul gets to Leisureland, his new home town, there are some lovely background details – a woman perches on a Rubik’s cube at a party; a single yellow rose requires both hands to carry it. But then it becomes less interesting as – apart from the rose and the Rubik’s cube – everyone and everything is in proportion.

There’s something deeply unpleasant about Leisureland. The original point of the downsized settlements was to reduce consumption and save the world, a noble aim driven by the bravely altruistic.

But instead this highly disruptive technology has been used to recreate a parasitic class of people who feel they deserve the high life, whatever the cost to society, exploiting poorer people (particularly immigrants) to service their needs.

Despite the pioneering scientists’ original aims, Leisureland’s new world has built in the same inequalities that beset the old. It’s hardly sustainable, relying on spending rather than creating. And it depends on the full-sized to keep the economy going and Fedex those tiny yachts round the world.

Resentment is rising; small people deserve “a quarter of a vote at most”, says one antagonistic drinker after Paul and Audrey’s goodbye party.

Life for the newly miniaturised Paul is dull despite the luxury of his new environment, until he spends an evening with upstairs neighbour Dusan (Christoph Waltz), a man who is hedonistic, amoral, untrustworthy and throws a damn good party. The next day Paul meets Ngoc Lan Tran, there with her team to clean Dusan’s flat.

Ngoc (Hong Chau) is a force of nature; a dissident from Vietnam who was downsized against her will by her government. She’s disabled (she lost her foot during a terrifying escape to the US) and is supremely driven to get on in life and help other people.

Paul is initially a bit of a white saviour, helping Ngoc deliver meals and assistance to those forced to live on the margins of this sparkling but empty society. Though this trope is rather inverted when he tries to help her with her false foot, only for him to damage it so badly it’s unuseable.

She speaks in broken English, but her loud, stocatto delivery, and minimal words, just serves to highlight how, unlike more privileged people, she simply doesn’t have time for waffle.

Ngoc doesn’t appear until about half-way, but from then she carries the movie, adding emotional depth and humour (who knew there were so many types of fuck? I’ve only ever needed to know about love fucks and pity fucks, but apparently there are lots more).

And then – with a group trip to the original Norwegian settlement – Downsizing gives up on sci-fi satire and gets very end-of-the-world.

Unfortunately the move from science fiction satire on the way a capitalist society uses altruism as its cover for spending and exploiting, to doomsday scenario, is too much of a tonal leap.

Damon is a pleasantly chubby everyman, gamely trying to come to terms with his miniaturised, single state, without offering anything new. Though at least we get to make jokes about Matt Damon always having to be rescued in movies, even if this time it’s the emotional kind.

So it falls to Hong Chau, with her warmly touching performance, to singlehandedly buoy Downsizing up through the second half.

buy / rent downsizing on vod or buy the dvd / blu-ray / 4k from amazon.com

Watch the tailer for Downsizing: