You are here: Home / Trailers / THE FINAL Avengers: Infinity War Trailer Is Here… 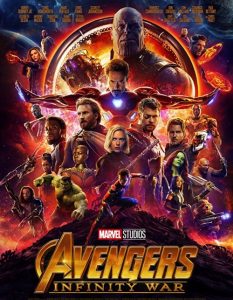 …and with so much Hollywood Royalty on display, I hope Marvel Studios makes them all travel in separate planes, just in case.

The Avengers are pitted against Thanos (Josh Brolin), who wants to wipe out half the universe – depending which half, Thanos, I could be with you on this. And if he gets holds of the Infinity Stones, he can do it “just like that” as Gamora says.

When I say the Avengers are pitted against him, almost every Marvel superhero ever seems to be in this trailer.

I don’t know much about superheroes (apart from in my dreams I am one, despite having no superpowers except being The World’s Best Mummy and that’s only on pocket money day).

But I still found lots in this trailer that spoke to me, particularly when Star-Lord (Chris Pratt) sums up their suggested plan back to Iron Man, Spider-Man and Drax with “I think it’s good except it sucks”, which is what I say to my children about all their suggestions that don’t involve worshipping me as The World’s Best Mummy, or ordering pizza for tea.

The movie is released on 27 April 2018. Watch the final trailer below or the earlier trailer from last November here.