You are here: Home / Trailers / The Avengers: Infinity War Trailer Is Here & I’ve Got A New Moustache 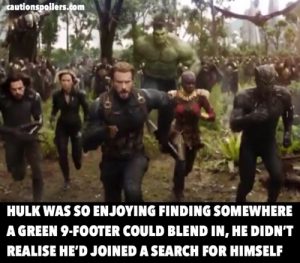 Not literally me. No, I take medication to prevent that. But this year has been the YEAR of the movie ‘tache what with Mindhorn, The Dream, Poirot, and Superman’s invisible one in Justice League.

So it’s great to find a new moustache, stuck to Chris Pratt’s upper lip at the end of the Avengers: Infinity War trailer, when up pop… Starlord and the Guardians Of The Galaxy crew!

I’m not great recognising superheroes (wasn’t Hawkeye in M*A*S*H?), so to be honest I was very impressed with myself for recognising that lot, even having seen the film earlier this year.

There are more superheroes in this movie than hitmen at the end of John Wick 2, and I won’t even attempt to list them all, though three are played by men called Chris. Non-Chris superheroes include Black Panther, Hulk, Black Widow, Doctor Strange, and Spider-Man.

But what are they DOING? (That’s a rhetorical question, for everyone in the world except me, for whom it is a literal question).

“There was an idea, to bring together a group of remarkable people, to see if we could become something more, so when they needed us, we could fight the battles, that they never could”, says the group voiceover at the start of the trailer.

And right now they’re teaming up to fight Thanos (Josh Brolin) who is aiming to steal the Infinity Stones (sorry, I don’t know what these are, and surely all stones are infinity stones).

Despite not knowing anything about superheroes (did I tell you I know nothing about superheroes), I LOVED the trailer. It’s noisy, and action-filled, and rather rousingly inspiring even though usually I think people in superhero costumes look a bit daft*. (Don’t @ me, I said the same thing to the DCEU fans a couple of weeks ago, and I lived. Just.)

Avengers: Infinity War is released in May 2018. It stars Chris 1, 2 and 3, Robert Downey Jr, Chadwick Boseman, Mark Ruffalo, Scarlett Johansson, Tom Hiddleston, Elizabeth Olsen, Benedict Cumerbatch, and a shedload of others. The film is directed by Anthony and Joe Russo.