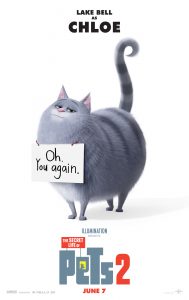 The movie has three storylines, though a main theme is Max’s anxieties that surface once his owner Katie marries and has a baby. A trip to a farm is a chance to meet Rooster, a dog whose approach to fear is decidedly “1970s parent”.

Meanwhile back in the city, Gidget, entrusted with Max’s Busy Bee toy while he’s away, has accidentally booted it into an apartment full of cats; and new dog Daisy enlists Snowball in rescuing a tiger cub from an evil circus owner.

You can also read my review, watch the trailer and check out some character posters.

“Rooster takes pity on him and helps him grow up…” Harrison Ford on the Welsh sheepdog who teaches Max how to be a dog:

“Once she gets her mind set on something, it gets done.” Tiffany Haddish on Daisy:

“There’s something contagious about his spirit”. Kevin Hart on Snowball the would-be superhero bunny.

“He takes things 1000% more seriously than they need to be taken.” Patton Oswalt on Max:

“I’m not as outwardly sure of myself as Gidget is.” Jenny Slate on her canine fluffball alter ego:

“She has a very lackadaisical way about her…” actress Lake Bell on Chloe the cat, a hairball-producing furball:

“Sergei is not a good guy”. Nick Kroll on his circus owner character:

“Every pet knows… if you pee on it, you own it!” A Look Inside featurette: