You are here: Home / Film Reviews / Secret Life Of Pets 2 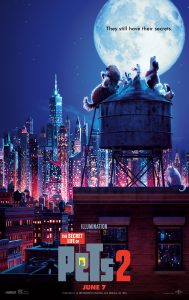 Cute animals in movies often become scene-stealers. Jonesy the ginger cat in Alien. Daisy the floppy-eared beagle in John Wick. Black Phillip the satanic goat in The Witch. Okay, not that last one. In The Secret Life Of Pets 2, it’s Rooster.

He’s not actually a rooster, he’s a Welsh sheepdog, wonderfully voiced by Harrison Ford. He perfectly embodies the quietly exasperated, laconic dog, who has a no-nonsense approach to life that feels new to the always-worried Max who has temporarily joined him on his farm.

For any of you who like to parent the 1970s way, welcome to your new leader; those who are glad we’ve finally moved away from telling children to toughen up may be less impressed – though his advice that the first step to finding your courage is to pretend not to be scared is eminently sensible.

Life has changed in New York for the pets. Human Katie is married to Chuck and they have a child, Liam. He grows up pretty quickly, though he’s really there as a device to explore the anxieties a new baby in the house can create; initially around what Liam’s arrival means for the pets, and later as Max worries about the baby (who endearingly copies his canine companions). Liam’s existence also means an excuse for the family and the family dogs, Jack Russell Max (Patton Oswalt, replacing Louis CK from the first film) and Newfoundland Duke (Eric Stonestreet) to go on a trip to a farm, not that much happens once they’re there.

In fact despite several story lines, and lots of characters (too many characters) there’s not much in the way of plot to be furthered.

Secret Life Of Pets director Chris Renaud is back, this time co-directing with Jonathan del Valhis. They’ve crafted an enjoyable, charming and attractive film that’ll keep the kids happy in half-term (my two children, aged 7 and 9, enjoyed it, especially the vomited-up furball). But it’s not very memorable, the story ideas feel stapled together, and overall it’s mildly rather than wildly funny. Expect wry smiles and amused eyebrow-raising rather than belly laughs (there are a few of those but not enough).

Still, look on the bright side. You won’t be subjected to endless pet-begging afterwards, unlike when my youngest saw 101 Dalmatians. (He did eventually lower his expectations to “just 12 puppies, Mummy”.)

Max loves Liam, but in the way that I, a cat person, love my dog. My dog is A+, everyone else’s dogs? Hmmm. (The opposite to how I am with my children.)

With Max about to leave on his trip, he asks Gidget to look after his best squishy toy, Busy Bee. (And if you later find your missing pooch in the dishwasher having a steam treatment, and a suspicious-looking small child nearby, blame the pure white Pomeranian fluffball that is Gidget for the idea.)

Gidget (Jenny Slate) almost instantly manages to boot Busy Bee into a neighbouring apartment, which turns out to be harbouring an elderly lady and about 100 cats. To rescue Busy Bee, Gidget must be taught the ways of the feline by gorgeous grey cat Chloe (Lake Bell), which is incredibly stressful as poor Gidget has to remain stony-faced while a ball bounces past her. (She also eats the family budgie, making this probably a 5-star movie for 50% of kids and a 1-star movie for the other 50%.)

Meanwhile Snowball the rabbit (Kevin Hart), living with little owner Molly, is now a bone fide superhero, thanks to his shiny blue superhero PJs and an attitude to match.

The new dog on the block is Daisy, a pretty Shih Tzu voiced by the wonderful Tiffany Haddish, without whom no animated sequel in need of a kick up the backside is complete. Daisy needs Snowball to help her rescue Hu, a black and white tiger cub she met in the hold of a plane, now being mistreated by Nick Kroll’s witch-like circus owner, Sergei. (“Our humans were safely stowed in the overhead locker” she says, detailing her trip.)

Although the stories eventually meet, it all feels episodic and disjointed, a film created for some entertaining set pieces but little more. And some of these are very entertaining: Max’s visit to a specialist animal behaviourist is a hoot, as every type of pet explains their anxieties, finishing up with evil twin kittens who gleefully offer “we start fires!” And parents looking around their popcorn-strewn kids’ screening, wondering how their lives came to this, will love Chloe’s catnip drug trip while wearing a fringed lampshade on her head. (I may be projecting here.)

There’s little to upset children apart from Sergei’s warning to the terrified cub that “if tiger does not do trick, tiger will become RUG!”

The animation is delightful, with the farm incredibly pretty and richly colourful – from the meadows of wild flowers to the blossom-heavy trees and the luscious evening skies. The farm animals are lively fun (a sneery cow, a mad turkey).

The messages feel not so much muddled as lacking focus. Max is forced to face his fears (and genuine peril), and he and Duke also have to learn to cope with change when baby Liam arrives (though the switch from concern at the new state of affairs to adoration at this new tiny pack member feels too swift.) In New York the other pets work together; and Gidget and Snowball come to realise that trying to do the right thing (freeing a tiger) can lead to more problems if you don’t think things through (a message many adults could do with learning). But everything feels rather shoehorned in, rather than properly explored.

I doubt children watching will mind. (Does entertainment always need to be a learning experience? I learnt almost nothing from my childhood and look at me now. Oh.)

You can watch cast/character featurettes here. And check out the trailer, Rooster trailer and film clip below – and scroll down for character posters.