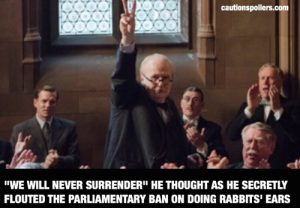 …as I used up all my Churchillian superlatives for Brian Cox’s Winston in the recent movie – and Gary Oldman looks like he’s going to be incredible in this. WHAT TO DO, WHAT TO DO.

Oh and thanks to this and the “other” Churchill I found out I’ve been pronouncing “Nazis” wrong my entire life.

The war was going very badly for Britain in 1940, and after a vote of no confidence left Conservative Prime MinisterNeville Chamberlain politically wounded, a national Coalition Government with the Conservatives, Labour and Liberals was mooted. But labour leader Clement Attlee refused to work under him, so Churchill became Prime Minister almost by default – and he wasn’t everyone’s choice after what was considered his poor judgement left him spending the previous years in the political wilderness.

With Churchill made Prime Minister he soon faced the threat of invasion, mutiny within his own ranks and a sceptical public as he was pressed to negotiate  a peace treaty with the Nazis, when he wanted to fight on for freedom.

It’s this period that The Darkest Hour explores. The trailer includes the famous “We will fight them on the beaches” speech to Parliament and I don’t know about you but I love a good Churchill war speech, even though when I fight I look like Hugh Grant and Colin Firth in Bridget Jones’s Diary..

Gary Oldman is Churchill and I’m gobsmacked by his transformation. His performance looks like it’s going to be extraordinary and he also looks nothing like Gary Oldman and everything like an elderly wartime politician with a great line in oratory.

Kristin Scott Thomas is his wife Clementine, and she looks so like Miranda Richardson as Clemmie in the recent Churchill film that I am going to find it very confusing. Lily James (so fabulous in Baby Driver), Ronald Pickup and Stephen Dillane also star.