You are here: Home / Trailers / A Second Trailer For The Predator… 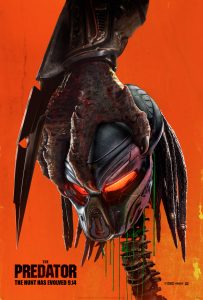 …and doesn’t that sound better than “the The Predator second trailer”.

Though if they are still making hats out of ribcages, there are probably a few Facebook selling groups that would love them, as long as the aliens stick some glitter and twiggy bits on them too and charge 100 quid a time.

Young Rory McKenna (Jason Tremblay) has accidentally brought the Predators back to Earth, and soon a group of soldiers are trying to fight them in the forests, surely a nod to the original.

Directed by Shane Black – who starred in the 1987 Predator as Hawkins – the new movie is out in the UK and US on 14 September. I’m looking forward to it – I liked the first one, and Alien vs Predator (yes, that was me) and have seen at least one of the other Predator films though don’t ask me which.