You are here: Home / Film Reviews / The Predator 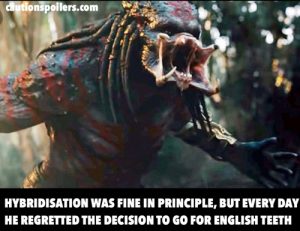 The predators in Shane Black’s latest entry in the franchise are big game hunters, tracking and killing for sport – and we’re the prey. They hunt for fun, and for DNA, stalking the galaxy for the best of each species.

At least if only humanity’s finest are in their sights I’m probably ok. (I mean, is there a need for a new predator with a big mouth who’s good at Scrabble? Actually they wouldn’t even need to hybrid me.)

This is an entertaining blockbuster – blood-drenched, witty, with a last minute pay-it-forward ending and a great performance from Olivia Munn as scientist Casey Bracket. What lets it down are a mostly strange last third, and some jokes that are dated and unfunny.

The first predator to arrive (this time round!) crash-lands in Mexico, witnessed by sniper Quinn McKenna (Boyd Holbrook).

His team are killed, and after finding the predator’s helmet, arm-gauntlet and what can only be described as an invisibility gobstopper, he mails them to a PO Box for safety – before he’s taken in for questioning by government agent Will Tragaer (Sterling K Brown), who’s almost as coldly functioning as the predators.

Thrown into a bus en route to jail, McKenna finds himself with several other handcuffed ex-soldiers, all of whom have been damaged in some way by their wartime experiences: PTSD, Tourettes, a religious obsession with the End Days. They initially look like a group of movie stereotypes but they often invert those ideas. Calling themselves The Loonies, they may be battered and war-weary but they’re also highly trained.

Meanwhile Casey Bracket has been brought in to witness research into the now-captive Predator. They’ve found human DNA and she quickly cuts through their scientific issue-skirting questions to her with “you wanna know if someone fucked an alien”. (Yes Casey, yes I do!)

McKenna is divorced, and his young son Rory (Jacob Tremblay) has autism. Thanks to an unpaid post office bill the box is delivered to his home, and soon the boy is checking out predator technology and making plans for a very special Halloween costume (for heartbreaking reasons – he’s bullied at school and hopes the helmet will make him unrecognisable).

In a move that’ll surprise no one except the top-notch scientific team investigating it, the predator escapes, though like your average small boy it’s easily tracked if you follow the trail of green slime. And it wants its armour back.

As Casey takes off after it, her dogged pursuit (she’s almost as relentless as the predator) marks her out as determined and forceful, prepared to fight off aliens and government agents.

Soon though the humans are ignored as a bigger, scarier Hybrid Predator with more teeth arrives in pursuit of Little Predator, and it turns out Little Predator might not have been so bad after all.

Munn is terrific as Casey, continually putting herself in danger when she could walk (or rather run) away. Holbrook is believably tough but flawed; Keegan-Michael Key as fellow-Loony Coyle is particularly good. (I also had a soft spot for the sweet if apocalyptic Nettles, played by Augusto Aguilera.)

It’s often genuinely funny, inverting expectations. As they’re about to head out in search of the trick-or-treating Rory, McKenna’s ex-wife Emily (Yvonne Strahovski) gives a movie speech about how amazing Quinn was as a sniper, even if he was a useless husband; the Loonies are quick to make clear it doesn’t really work for them. And there’s a good running gag about why the predators are misnamed. (Well I thought it was good – thought admittedly I still want answers as to why our favourite assassin, first name Jonathan, isn’t called Jon Wick.)

The Predator doesn’t always work tonally. At one point shortly after rescuing Casey from government soldiers, the Loonies hole up in a motel room. She’s asleep and while the men try to make her feel at home when she wakes, there’s still a slight undercurrent of fear, and it’s not clear whether it’s deliberate or the director doesn’t understand women’s worries (actually we probably know the answer to that one). There’s something off about that scene, despite the jokey dialogue (most of which is at her expense).

And some jokes are dodgy as hell – why include them? Fellow Loony Nebraska Williams admits to Quinn that he’s changed his real first name, Gaylord. If you want a man’s name to mock why go for the homophobic gag? Just pick a name loved by the upper class and privileged, like Mungo. (Obviously, apologies if you are an earthy, streetwise Mungo – in the UK you’d have a Scottish estate and be a beneficiary of primogeniture.)

Mostly though the humour works, a change from the usual shoehorned blockbuster gags.

Rory’s autism is portrayed as an evolutionary next step towards making us better humans, rather than as a disabling condition. I’m not convinced by their evolutionary claims, but this is sci-fi and I don’t believe in aliens either. You can show a disadvantaged group in a positive light in a work of fiction without scientific accuracy. And it doesn’t just focus on one exceptional skill; Rory’s autism means he has an excellent memory and a flair for languages, as well as sensory issues.

The Loonies’ mental health issues are just part of them, and they’re a well-bonded bunch (though Alfie Allen is wasted and I can’t actually remember what his character’s past experiences were).

They also – like Big Brother contestants necessitating 10 evictions on the last night – survive an impressively long time, making it more emotional when any are threatened.

Some ideas fall flat. Giving the human survivors on both sides a head start before he comes for them, Hybrid Predator seems to want some recreation on his business trip. Imagine an office team-building exercise in the Lake District where the Accounts and the Creative departments are forced to work together but you know that afterwards any survivors will go back to hating each other.

The film looks as you’d expect. The predator ship that Hybrid Predator has come for is entirely functional: grey metal and red lights (or maybe that’s the Predator version of Hygge). We’re in forests, jungle, bare interrogation rooms.

There are enough dripping entrails to keep gore fans happy, and I liked the effects – particularly the defence shield gradually enveloping the alien spacecraft.

And for once it’s not too dark so you can actually see what’s going on (if I want to listen to yowls, bangs and crashes in complete darkness I can just lie in bed at night listening to my dog trying to chase the cat through the catflap, for free).

Watch the second trailer for The Predator:

Watch the first trailer for The Predator: