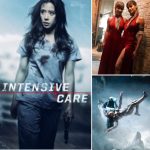 It’s customary to start an interview with a stunt performer by telling the reader that while you may not recognise them, you’ve almost certainly seen them in movies. But when it comes to Tara Macken, her blossoming acting career means you’ll soon be recognising her on screen too. Watching new indie comedy action thriller Intensive… END_OF_DOCUMENT_TOKEN_TO_BE_REPLACED