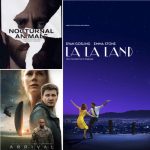 Once The British Academy of Film & Television Arts awards (the BAFTAS) were held after the Oscars, by which time everyone was bored with awards ceremonies and the designers had literally run out of nice dresses, so hardly anyone famous actually went. Every now and then a bona fide Hollywood megastar would put in an appearance… END_OF_DOCUMENT_TOKEN_TO_BE_REPLACED