Be afraid, be very afraid! (But in a good way.) The fifth edition of Final Girls Berlin Film Festival will take place between 6 and 9 February, at City Kino Wedding – showcasing horror written directed, and/or produced by women and non-binary filmmakers. The exciting programme features eight curated short blocks and nine feature films,… END_OF_DOCUMENT_TOKEN_TO_BE_REPLACED 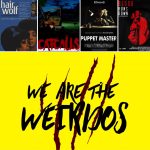 The Final Girls UK, a collective dedicated to exploring feminism in horror and highlighting women’s participation in the genre, are back with their second We Are The Weirdos tour – a selection of nine horror shorts by women. The absolute standout is Hair Wolf (5/5), directed by Mariama Diallo, which won the narrative short film… END_OF_DOCUMENT_TOKEN_TO_BE_REPLACED