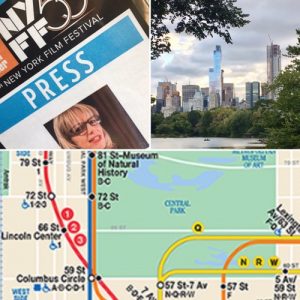 I’m back from a week at NYFF. I hadn’t been to Manhattan since the mid-90s, when I lived in London and was used to people thinking I was going to murder them if I made eye contact.

Now I live in a small town where even if not everybody knows my name (“that blonde one” seems to work for most people), I’m used to a slower pace.

And I did all of those things! (Luckily I didn’t forget to tip anyone. In fact I tried to tip everyone, even if they hadn’t done anything.) I also saw some great films (and some average films, but luckily no terrible films). 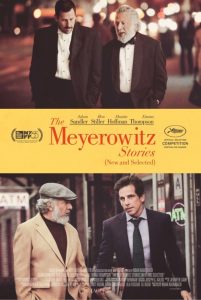 I was nervous about reviewing Noah Baumbach’s latest, as Adam Sandler and co-star Ben Stiller are two actors I constantly mix up (see also: Taron Egerton / Ansel Elgort, and Alison Brie Larson), but I think I’ve finally worked out which is which. Lots of funny lines, my favourite being from stepmom, raging hippie and appalling cook Maureen (Emma Thompson), describing one man as: “babyfaced but sinewy, like an old lover of mine, Willem Dafoe”.

It looks like a typical New York story – but if you are over 40 with siblings and at least one rude parent, you’ll find a lot you recognise. Dustin Hoffman plays Harold Meyerowitz, an artist who has never reached the levels of success he thinks he is entitled to. He’s probably not that great an artist, and it’s fair to say his relationship skills are even less worthy of acclaim. The performances are uniformly excellent, particularly from Adam Sandler. Yes I said Adam Sandler. Rating: 4.5/5

New wave film director Agnes Varda (88) and street artist JR (33) go on a hilarious road trip through France’s rural villages, taking photos of locals, listening to their stories, and pasting the resulting giant pictures on outside walls, factories, and shipping containers. It’s also about ageing, and death, including the death of friendship.

As villagers tell their stories with great eloquence and humour, looming invisibly above all this is Varda’s decades-long friendship with director Jean-Luc Godard. Documentary is not a style I gravitate to but this is an absolute gem, so if you get the chance to see it please do. Then take a selfie of yourself eating a giant baguette. Rating: 4.5/5 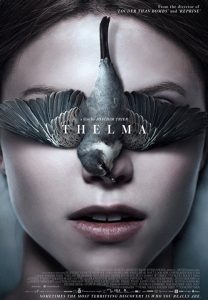 Scandi horror Thelma is Joachim Trier’s latest film – set in Norway, it’s about a young woman, Thelma (a scary and luminous Eili Harboe), who leaves her very religious, obsessive parents in the countryside to start university on Oslo. There she falls in love with a woman and finds she is awakening (or is that reawakening?) supernatural powers.

Yes it’s got lesbian sex, fantasies involving snakes, and a supernatural teenager, but it’s really not a typical teenage horror.

It is, though, a movie that constantly shakes you out of your comfort zone by forcing you to question who you are rooting for. Who is responsible? Culpable? A victim? Thelma? Her strange parents? (I must confess to being Team Dad but that’s because actor Henrik Rafaelsen sports a beard and some great knitwear in this and I have a thing about men with beards and big jumpers.) Rating: 4/5

Isabelle Huppert! No more need be said but I’m going to say something anyway

She stars in Madame Hyde, a very, VERY loose reworking of Dr Jekyll and Mr Hyde. Huppert is Mrs Géquil (geddit?), a terrible physics teacher loathed and despised by fellow teachers and pupils alike. But a chance lightning strike results in gradual changes to her teaching abilities as she finds that the passion she has always had for her subject is now something she can pass on.

She also becomes an accidental avenging angel, which is always satisfying, and an accidental setter on fire of things. (Speaking of which, probably best not to watch it if you’re still traumatised over Daisy the dog’s demise in John Wick.) Rating: 3.5/5 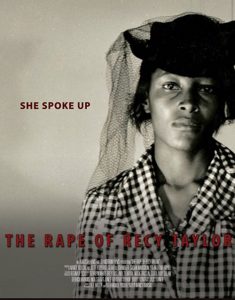 The Rape Of Recy Taylor is the harrowing but ultimately uplifting story about Recy Taylor, a young mother raped by six white youths on her way home from church one night in Alabama in 1944. It’s the story of the fight for justice for Recy, and also does a terrific job setting this case into context regarding the abuse of black women by white men, and the wider civil rights movement.

The film intercuts with clips from black race movies – these were films made from about 1915 onwards about black experiences, with black directors and mostly black casts. They are fascinating and worth looking into more if you never come across them before (I hadn’t). Though the director Nancy Buirski is white (and has written about she, a white woman, telling Recy’s story), most of the people telling Recy’s story on screen are black – activists, scholars, and two of Recy’s siblings. Rating: 4/5

Did You Wonder Who Fired The Gun? is a very personal account by director Travis Wilkerson, about his abusive white supremacist great grandfather SE Branch who murdered a black man, Bill Spann in 1946. As much as a search for truth it’s also about the erasure of black experiences – Bill Spann seems to have disappeared from history while Branch swaggers through home movies, clearly aware he is untouchable when it comes to getting justice for his victims.

WiIkerson’s style will not be for everyone (and I found it worked slightly less well than The Rape Of Recy Taylor), but the difficulties even now that he has researching the murder shows how necessary it is. Rating: 3/5

What are you waiting for?

This is Lucretia Martel’s first feature in nine years, so it’s fitting that it’s about waiting. In fact there’s so much waiting – as 18th century magistrate Diego de Zama awaits news from the Spanish King for a new posting away from the enervatingly hot South American town where he works – that it does drag a little.

Having said that the cinematography really is extraordinary so if that kind of languid filmmaking appeals to you, you will love this film. Towards the end the action really cranks up, with some shocking scenes, but in the main it’s not a movie where much happens (which is kind of the point). It’s a film I would heartily recommend to some people I know, and heartily suggest avoidance to others. Rating: 3.5/5 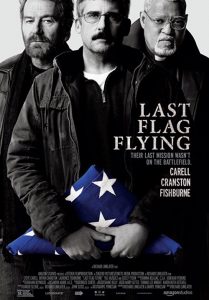 Quite a long journey home

This 2003-set Richard Linklater movie is a road and rail trip where three Vietnam veterans who haven’t seen each other in decades accompany the body of the son of one of them home for burial, after his death in yet another war. Mainly it’s about truth, and how much it really matters – or even if it can be more of a hindrance than a help. Steve Carell plays Doc, the father of the dead soldier. Timidly starting off almost shrunk into his anorak, he discovers his voice when deciding how and where to bury his son.

It’s a sad film but not a completely sombre one, with flashes of humour (though if I’m honest that journey home drags a bit). And though it’s very male there is a fabulous performance from Cicely Tyson as the mother of a man who died in suspicious circumstances when the three men were in Vietnam together. Rating: 3.5/5 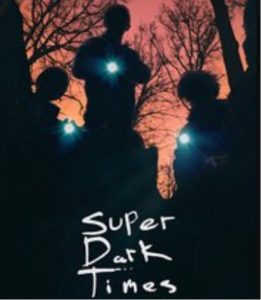 Ageing is so underrated

This wasn’t part of the festival but I saw it at a press screening while I was over there. A gripping and intriguing first feature from director Kevin Phillips, this tale of accidental death among teens and subsequent tipping into madness in 1990s America is very affecting.

It reconfirmed that I never, never, never want to go back to being a teenager too, though luckily in my day bedroom walls were adorned with stolen road signs and the odd traffic cone, not a samurai sword. Thanks to the washed out, wintry cinematography I came out feeling very chilly indeed, in both senses. Rating: 3.5/5