You are here: Home / Interviews / Deciphering The Making Of Short Film The Code With Director Patrick Ryder 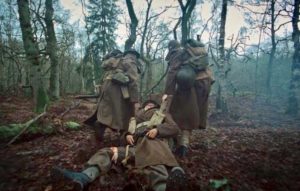 Award-winning director Patrick Ryder’s latest short film is The Code, a World War 2 drama set in the forests of France shortly before the events of Dunkirk.

It follows brothers Will (Kevin Leslie) and Eddie (Jacob Anderton) and their friend Tommy (Robert Dukes), separated from the rest of their regiment and desperate to get to safety. (Read my review here.)

1, I really enjoyed The Code; where/when will people be able to see it for themselves?

Thank you for your kind words. At the moment The Code has just started its festival run; this usually runs for around a year. We are hoping the film will do well and get some positive recognition. It will be screening next at the Out Of The Can Film Festival in Derby on the 5th August.

2, Is it a story you’d like to develop into a feature film? And if so are you looking to expand within the confines of the story you’ve made here, or follow them into the future?

Yes absolutely! We are looking for ways to develop this film as there’s a very natural transition from short to feature with this kind of story. It would allow us to develop the back stories and expand the scale of the battles.

3, I loved the period details; especially the dance in the village hall. Was this a period you liked and knew about anyway? Did you have to do much research?

Yes I have always found this period in history fascinating. In many ways because to generations these days it seems almost alien to think the whole world was at war, and this really did affect so many families and lives. 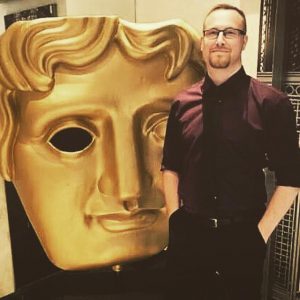 4, Are you interested in war films as a genre, and if so how do you think they need to move forward? (I’m all Churchilled out right now).

I’ve always been interested in this period. Films such as Saving Private Ryan and shows such as Band of Brothers and The Pacific were so effective and inspired me in many ways. I thought Dunkirk was clever in its use of time in a war film, which was a new way of looking at things.

I think people will always want these types of films because it’s a part of history that can never be forgotten.

5, Tell me about where you filmed The Code. Was it a tough shoot, for you and/or the crew?

The battle scenes were filmed in Cumbria and it was probably the toughest and most rewarding shoot I’ve been on. The temperatures and weather were shocking at times, but everyone, all the cast and crew knuckled down and were all an inspiration with how hard they worked. We knew we had something pretty special on our hands.

6, Watching the film, I felt that the look and feel had that small-scale confidence where it looks real but you also haven’t overreached yourself or your budget. The explosions look genuine, but you’re not blowing huge craters in the forest floor. How do you match your scene-building to your budget? Is that a director’s skill that only comes with experience?

I have been working on all types of film for several years now, but I have often found short film making the most rewarding. We learn from our mistakes, so with The Code we had confidence in what works on a smaller scale budget and what doesn’t.

We wanted to make sure as much of it was real as possible. I felt having real life explosions going off was very important to give the film some realism in the bigger moments.

I am always careful to know what you can do with what you have, but use it well so it looks twice or three times as expensive on screen. 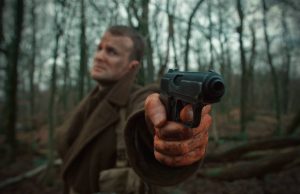 Robert Dukes as Tommy in The Code

7, I enjoyed your previous short, Human [about a forgotten android found in a warehouse] and you could argue both are about people/creations who’ve been abandoned, and are now trying to make their own way. Do you find yourself exploring similar themes in different projects or do you want to tell different stories?

Yes absolutely. A theme which seems to always be on my mind is that of belonging, of being accepted. I think all of us travel through our lives on a journey and I feel that is the strongest narrative in film, to see someone struggle with the hope they can make it in the end.

Even my other recent short Chimera – even though it’s a completely different film, a different genre and a far darker film – it still has at its core a sense of belonging and acceptance for the main character.

8, How much does social media affect your work? Do you like it or is it a necessary evil? I’m sure I first knew of actor Kevin Leslie [who plays Will] from Twitter, so he had name recognition for me before I saw anything he was performing in…

I think social media is a key attribute for up-and-coming actors and filmmakers. Whether you are a fan of it or not, it is needed. It is a strong way to get your name out there, for your work to be seen and to create a fanbase.

When I first started many moons ago we had to fight for our films to get seen; now it is almost a natural thing that develops alongside each film. I work hard to create art, post about the actors and films, and support others.

The industry has various levels, and if you make a good name for yourself it will be seen by others.

Check out my review and watch the trailer for The Code here: