“80% of people who finish their first film, do not make a second. There’s a variety of causes for this, but it’s at this stage that many people who aren’t white males drop out. I’m currently working with the East End Film Festival to set up a prize for filmmakers to fund the development of their second features. I feel like I was incredibly lucky to make a second film and I want other people to get the chance.” Film director John Jencks 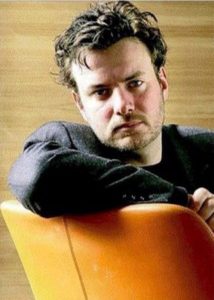 Director Of The Hippopotamus and The Fold, John Jencks

John Jencks is the director of the recently released – and very funny – feature film The Hippopotamus, an adaptation of the Stephen Fry novel. It stars Roger Allam as the misanthropic, whiskey-sodden ex-poet Ted Wallace, who pitches up at his friends’ stately home to investigate a series of alleged miracles (with Fiona Shaw and Matthew Modine as the Lord and Lady of the house).

This was Jencks’ second feature, after 2013’s The Fold, starring Catherine McCormack as a priest who tries to replace her dead daughter with another girl. But not all his movies have been so successful –  one of his early short films was completely blank because he loaded the film wrong.

John kindly answered all my questions on everything from diversity in film, to miracles, to whether Roger Allam really is as nice as I want him to be.

John Jencks: I first read the book in 2003 when I was visiting film schools in the US. I was staying with some friends of my parents in LA and sleeping in their fled-the-nest son’s bedroom. I had terrible jet lag and was staring into oblivion, rolled over and on the bedside table was The Hippopotamus. I read it in 2 nights flat and hurt myself trying not to laugh too loud and wake up the rest of the people in the house.

In 2007 when I started The Electric Shadow Company I slid the book across the desk to my producing partners (Jay Taylor and Alexa Seligman) and said, I think we should make this into a film.

It wasn’t an easy novel to adapt — it is epistolary, wildly transgressive and has about 60 characters in it. But there were two aspects of the novel that really gripped me. First, the journey in Ted’s character from cynicism to compassion. Second, the challenge of making a film that would make people laugh and think.

CS: I thought Roger Allam was absolutely brilliant in The Hippopotamus, and amazingly I didn’t keep thinking when listening to his voiceover “Cabin Pressure” or “Sarah And Duck”. Was he the actor you had in your mind when casting and what was he like to work with? He sounds like he’d be lovely though I may be projecting here.

JJ: I’ve been asked this question loads and once, just once, I’d love to say (what I’m sure everyone wants me to say)… that he’s a complete c%^t, but I’d be lying. He’s a very hard working actor, completely committed to the projects he works on and kind all the way through.

I knew Roger mostly from Cabin Pressure, The Thick of It and the stage (I’d seen him when I was young in Arcadia and Art). When he signed on to play Hippo, I basically jumped in the air with glee. He’s one of the few actors I can think could have pulled off the comedy and pathos required to portray a compelling Ted and I’ll never be able to thank him enough for doing so. 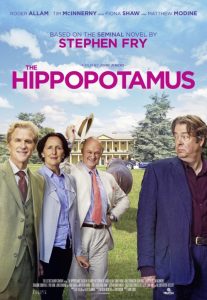 CS: You’ve been in the industry for a while now but do you ever get onset, see all these established actors and Hollywood stars and think “OH FUCK!”

JJ: On the first day of The Hippopotamus, I did have to go and have a little sit down after feeling exactly the emotion you describe… WHAT THE HELL WAS I GOING TO DO WITH ALL THESE INCREDIBLE PEOPLE. After a couple of minutes I realised that they’d agreed to be in the film. That meant they believed in me and the script, so any sense of inadequacy had to be jettisoned pretty quickly or it was going to get in the way of doing the work.

CS: That idea in The Hippopotamus that we really want to believe in miracles – I can see why Jane, who has terminal leukaemia, is desperate for a miracle and also has nothing to lose by believing, but for everyone else… Do you think we’ll always want for something other-worldly to happen? Is it all rubbish or sometimes not-yet-explained science?

JJ: I have a lot of experience of cancer within my family. My mother set up Maggie’s Centres a charity that provides support for people with cancer. So I know how important hope is in keeping people alive.

My experience of cancer diagnoses is that they often feel like a death sentence. So in an attempt to keep hope alive, people sometimes turn away from the prognosis and treatment. It is hard to challenge this without destroying hope or being condescending. But it is important to do so.

All scientific discovery is a work in progress and all diagnoses have a varying degree of statistical deviation. So, it is a perfectly valid choice for people follow their hopes and beliefs in their treatment. However, don’t also give up on the science that works, because that is what has the best chance of keeping you alive.

CS: After you’d finished the film how long before you stopped humming I Believe In Miracles by Hot Chocolate (I KNOW it’s not in the film but I am still singing it).

JJ: I can’t believe I haven’t thought of it before, but there’s now a version of the film in my head with a sequence that has David dancing around the stables to that song.

JJ: Our business at The Electric Shadow Company is in two parts, a production company and a film finance company. We try not to put too much money into our own films, and likewise try to keep out of the creative on the films we finance. Swallows And Amazons had a great production team that we were really happy to support in making the film.

Executive Producer is something of a catch all title that can be given to anyone involved in a films production who has a strong oversight roll. In our case we are often involved in putting together the business structure of the film. Where the money is coming from, how it is going to go into the film and how it is going to come out. Every film is its own individual business and will find its finance in different ways. Each pot of money you take from will have different strings attached and the trick is to find the way to finance the film without tangling any of those strings up. 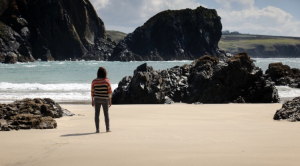 Catherine McCormack in the John Jencks film The Fold (2013)

CS: You’ve had a lot of executive producer credits, then directed two features, and now you’re a producer on The Crow. Do you want to keep doing both?

JJ: Definitely. Directing takes ages, is emotionally draining and physically exhausting. Exec- ing is a bit like doing algebra in three dimensions… complicated, but in the end it is just maths. If I did the former without the latter I’d go mad with frustration, if I did the latter without the former I’d get very bored.

CS: As a director how much control do you get over a script that comes to you fully written? Can you change anything?

JJ: Everything is always up for change, so long as you can convince people to follow you.

CS: When it comes to diversity in films, do you get much control over that when it comes to casting and crew? (I’m still amazed how many powerful, big name directors have it pointed out to them after their film is released that it is full of white men and they go “er… ummmm…”)

JJ: We had a 45% female crew on Hippo, but that’s always been the case with me as I have more female friends than male. The cast also has a good selection of strong female characters. But I would absolutely admit that on the BME front the cast is not at all diverse.

There’s a statistic that causes me great concern. 80% of people who finish their first film, do not make a second. There’s a variety of causes for this, but it’s at this stage that many people who aren’t white males drop out. I’m currently working with the East End Film Festival to set up a prize for filmmakers to fund the development of their second features. I feel like I was incredibly lucky to make a second film and I want other people to get the chance. So I’m giving all the profits I earn as director on The Hippopotamus to fund this prize. 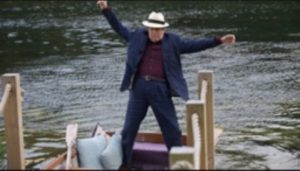 Roger Allam as Ted Wallace in The Hippopotamus

CS: What’s it like seeing your feature film on the big screen for the first time, with people watching?

JJ: Incredibly nerve-wracking for the first 30 seconds until the first laugh, then fine! I’ve yet to be in an audience where people don’t love it.

CS: I read that one of your earliest short films was blank because you loaded the film wrong, which made me laugh. Back in the 80s you could probably have got an Arts Council grant for that – did you consider entering it for any festivals?!

JJ: I’ll dig it out for when the BFI decide to have a major retrospective of my work.

CS: If money / copyright / literary executors were no object, what would be your next film and who would star (alive or not)?

JJ: Ok, I’ve sat here for 10 minutes thinking about this… How about an adaptation of A Short Walk in the Hindu Kush, staring Cary Elwes and Rupert Everett when they’re both in their late teens.

CS: And what IS your next directing project if you have anything lined up?

JJ: I’m working on a female led body horror about a woman who invents a new kind of birth control. It’s at a very early stage at the moment and so it’s hard to talk about in any detail, but I’m half-jokingly describing it as a cross between The Fly and The Man in the White Suit.

CS: Also on your next feature can I come and visit the set please? I can bring homemade cakes so you will save money on catering.

JJ: Absolutely, never look a gift horse in the mouth, especially when cake is involved.

Thanks to John for answering everything I asked him about. You can follow the Hippopotamus film on Twitter: @HippoTheMovie