You are here: Home / Film Reviews / Hippopotamus, The 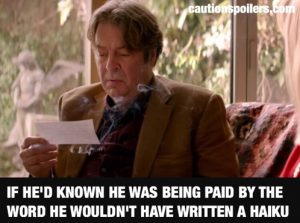 *** Read my interview with John Jencks, director of The Hippopotamus ***

Stephen Fry’s book of the same name came out over 20 years ago but The Hippopotamus is still very relevant today.

Partly as, to twist a phrase, in Britain the aristocracy will always be with us, but mainly because humans as a species seem hardwired with a bizarre mix of practicality and credulity.

Ted Wallace (Roger Allam) is a drunk living off past literary glories who hasn’t written a poem since 1987.

Now reduced to working as a theatre critic for a newspaper culture section, he ends up at a truly terrible performance of Shakespeare’s Titus Andronicus (always a bloodbath, this time in more ways than one), with a cast looking, in their red cloaks and gold loincloths, like extras from that sepia-toned, ab-filled Spartan epic 300. Making his feelings clear to cast and audience, Ted ends up fighting the director in the stalls.

This immediately got me on side, as after seeing too many bad Shakespeare adaptations over the years, before heading off to the theatre I now slap my thigh three times, do up some imaginary yellow garters and shout Hey Nonny Nonny as a sort of talisman.

Soon Ted is sitting in his newspaper editor’s office but the doesn’t go too well either: “I also know you chose Culture because you couldn’t get the News Desk” he tells his young hipster editor, feeling himself invincible, just before he is sacked: “I have as much need of you as a fucking fountain pen” retorts his now ex-boss, which rather put me off Millennials as fountain pens are awesome and so is Quink.

Later, sitting in his no-longer-favourite pub, as they’ve finally refused an extension to his line of credit, Ted is approached by a beautiful young woman who claims he’s her godfather. Jane (Emily Berrington) has a “project” for him – to visit Swafford Hall, home of her mother’s brother and his family, and investigate miracles that have apparently been taking place there. Jane has leukaemia and after spending what should have been her last few weeks at Swafford with her extended family she has apparently been cured.

Pitching up at Swafford, he picks up his long-dropped friendships with Annie (Fiona Shaw), the aristocratic Lady of the house, and her American businessman husband Michael (Matthew Modine). Michael is a CEO, or as Ted describes him: “a sort of cross between a managing director and a cunt”. Their 16 year old son David (Tommy Knight) and David’s older, more rational brother Simon are also there.

At any moneyed English stately home the weekends will be full of freeloaders, and as the aristocracy becomes more impoverished the few remaining wealthy houses must be bursting at the seams from Friday to Monday.

Jane hassles him constantly from her home, which you can understand as she is, literally, on a deadline. Ted, too drunk to be a natural sleuth, is still forced to spy on people like a tipsy Miss Marple, a slice of Annie’s delicious homemade cake in hand, looking for clues. He does though have a finely honed nose for bullshitters.

Like many teenagers, Ted’s godson David is sex-obsessed but he doesn’t possess the social skills to know when talking about penises isn’t appropriate, though as aristocrats are known for seeing social niceties as middle class affectations the answer is probably that it’s never not appropriate to talk about penises.

David is also into poetry which I would have imagined would pose more of a worry in posh circles.

Ted is self-loathing and sarcastic, but he’s blunt without being mean and is actually very understanding of teenagers, and what is normal for them: their obsession with sex, and their desperation to understand the world without the world view to do so properly.

David is certainly different but does he really have the ability to heal, or is everyone so desperate to believe that they are suspending the most basic standards of scientific rigour? And if there really is magic afoot at Swafford Hall, how do they manage this news when there are real people involved with real illnesses?

Allam bestrides this movie: funny, annoyingly self-loathing and sarcastic all at the same time. And Fiona Shaw is to the manor born. Matthew Modine is good as the super-rich American who has married into class and probably feels he needs an interesting family backstory more than most. Tommy Knight as teenage David has that mix of overweening confidence, opportunism, and insecurity.

The Hippopotamus isn’t a long film (one of the reasons I love British movies so much is that they rarely go over 98 minutes) though it does drag slightly in the middle with lots of wandering round fields looking for people. The first act brilliantly sets the tone though, and the last third really picks up pace: the dinner party denouement is wonderful.

Like almost every film I’ve reviewed this year family looms large here. Old family stories and legends are the threads that attach us to our past, but at the same time make us that little bit more interesting than him over there with the bog-standard granny and grandad, so it’s easy to see how in The Hippopotamus everyone really is hoping that miracles can happen.

Read my interview with John Jencks, director of The Hippopotamus

buy/rent the hippopotamus on vod or buy the dvd / blu-ray from amazon.com

Watch the trailer for The Hippopotamus: