“What I never understood before meeting Hugo is that sci-fi, it’s a lot about philosophy.” Pella Kågerman

Swedish sci fi film Aniara is based on a well-known poem written in the 1950s by Harry Martinson, who later went on to become Sweden’s poet laureate. Originally written as his response to the hydrogen bomb tests, directors Pella Kågerman and Hugo Lilja have now updated it as an allegory for consumerism and climate change.

The Aniara is a spaceship carrying human refugees to Mars, after a burning planet Earth has had to be abandoned. It’s meant to be a three-week voyage. But after space junk hits the ship, she’s pushed off course and is left drifting. The Chefone, or Captain, claims as soon as they come into another planet’s orbit they can use its gravity to bounce them back into the correct flight path, though it might take a couple of years. But as two years stretches to four, ten and beyond, its passengers are increasingly unable to cope.

(The film is currently in cinemas and on digital in the UK – you can also read my review of the film and my interview with “Chefone” actor Arvin Kananian. These interviews are quite spoilery but it won’t affect your enjoyment of the movie…)

Sarah: From what I’ve read, it’s a very culturally significant poem in Sweden, but it hadn’t been adapted as a feature film before. Is there a reason for that? Because it’s something that remains relevant with each new disaster we get ourselves into, isn’t it?

Pella: I think because it is so dark, it’s hard to get money for it, so we had to work a lot with hope. The only demand that the daughters of the writer had, was for us not to change the ending.

At one point we actually pitched this film in Hollywood for a famous agent and he was following the story until we came to the end, where he was like, “But one survives…”

They’ll always say you’ve got to have a survivor, or a dog survives, or something like that. Because the poem is so culturally significant, does that make it harder to adapt? Do Swedish people feel they have ownership of it?

Hugo: Yeah, I think it is, but most have been pretty pleased with the results. I think a big reason for it not having been adapted before is that it’s a poem, so it’s quite a big adaption work you have to do. And also for technical reasons – it was written in the ’50s but then you didn’t have the technology to make a space film.

Pella: I mean, Sweden is not known for their space movies. 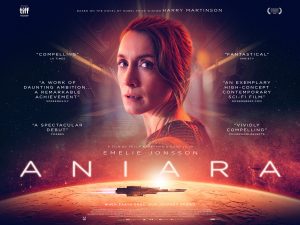 Were you sci-fi fans anyway? Or was it particularly the resonance of the story?

Hugo: I have a background in role-playing games, those kind of things. Like, nerdy role-playing games. So I come from that sort of fantasy and sci fi and horror, games really. And that brought me to film because I wanted to do it professionally. We have been working together for ten years and you [Pella] come more from like art and documentary. Then we have mixed each other’s interests.

Pella: What I never understood before meeting Hugo is that sci-fi, it’s a lot about philosophy.

Because philosophy is your background, isn’t it?

You say that you were told you had to keep the ending. Did you change much else – apart from that the futurism becomes futuristic from this point, rather than from from the ’50s?

One of the things I liked about it is that although it is futuristic, it actually looks very “now”. It reminded me of Heathrow Airport, which is the most consumerist airport I’ve ever been in. For two things: because they want your money as you’re going through; and also to distract people because even though it’s big, it’s claustrophobic. And I thought you did that really well, in that there’s this massive spaceship, but you can’t get off, the claustrophobia.

Pella: And you go in circles in Heathrow, don’t you?

Yes suddenly you’re back where you started, at the same perfume counter or something like that. Where did you film it?

Pella:  It was in different shopping malls, in Sweden.

Hugo: Yeah. And the Swedish ferry, a lot of different locations actually.

Pella:  But they all kind of look the same in a way, you know?

Heathrow is just on a bigger scale too. I’m not completely obsessed with Heathrow Airport, but every time I go to it, I just think this is so big and so many shops.

Hugo:  And that was actually something we wanted, we talked about, that we wanted people to be reminded of this. When you’re in an airport or in a shopping mall…

Pella: …what if your whole world was Heathrow Airport?

I really liked the MIMA [a sentient computer which can read people’s favourite memories from Earth and play them back in their minds]. She’s technologically advanced but she’s really just a form of nostalgia. How much did you have to change her from the poem?

Pella: There we had to change her visually. She was described as different TV screens, and we didn’t think that would have the same impact on the viewer today.

Hugo: Because as you said, it’s nostalgia, and it’s escapees trying to get away from reality in a sense. Or get a way back to something. And as Pella said, now when you have all these handheld devices where you can watch images, you have to make it a more transcendental experience.

Pella: But in a way maybe she is Instagram too.

If you were in this situation, would you rather be one of the passengers or one of the crew who knows what’s going on? Because there’s something to be said for blissful ignorance, isn’t there, when you’re hurtling towards your doom.

Pella: That’s such a good question. We didn’t really think about that until we were done with the film.

When people see the film, do you worry you’re preaching to the converted in a sense? I mean, it’s a warning for what we’re doing. Are we we talking to the same people all the time who already know?

Pella: I know we do.

Hugo: Yes, and that’s a problem. Sci-fi could be a vessel for reaching a larger audience. I’m not sure we do that with this film.

Pella: But we are living in such turbulent times that I think we should continue screaming.

And eventually hopefully it gets through to them.

Pella: But I think we maybe have to be smarter, in that there’s a big responsibility on us to not be passengers but to try to act. And I think we’re both thinking about how to reach a bigger audience in the future.

Maybe we don’t need those super dark stories now. Maybe we have stories where we show that change is possible, that you can actually change society completely and you will be fine and it will even be better, you know? That those are the stories needed today. Because with the climate crisis, it’s so abstract, it’s hard to grasp everything and you need those stories that make it just simpler to act.

I thought it was interesting that the original poem is about nuclear testing. With climate change, it seems everyone knows it’s happening. But you know, you recycle a few bottles and then… In some ways it feels less instant, doesn’t it? Nuclear annihilation would be instant.

Pella: I know, exactly. And it’s instant to show on film, you have the bomb, and climate change, how do you show it?

Pella: In Sweden we’ve been very much celebrated, like I feel embarrassed.

You made it on quite a low budget, was it quite a stressful shoot for you? Did you ever just think, this is never going to get finished…

Hugo: I lost my hair due to stress. So it was really stressful. I guess it’s affected you [Pella] as well, but not physically. We really had to stretch the budget for making something like this. So we kept shooting and adding things, actually shooting some of the scenes in our own living room.

You had a terrific cast. I particularly loved the astronomer. Because one of the things that really struck me, it’s science that got them up there, but there’s a lot of biblical talk in terms of celestial beings. She’s very much, “it’s chance”. But we’re still clinging on to God, even though we’ve destroyed him.

Pella: She’s the character we wrote to be able to put the most of the writer’s work in. Like she’s him in a way, you know? 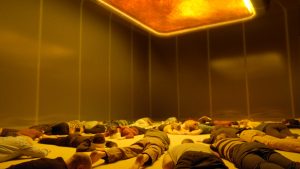 You have a small baby, don’t you, and there’s the baby born on the Aniara. That’s something else that makes it more real, isn’t it? I know when I had my children, you look at them and you think, individually you’ve got to get them safely to adulthood, but also, on a collective level, what are we doing? Did both of you feel an extra pressure when you were making Aniara, being parents?

Hugo: Yes definitely. But I think also with the really bleak ending, I think that is also the point of Aniara.

There are so many films with the same premise, but [in those films] we let the Earth be destroyed and then in the end we build a new technical paradise.

Read my 4-star review of Aniara and check out my interview with actor Arvin Kananian, the ships’s Chefone (Captain).