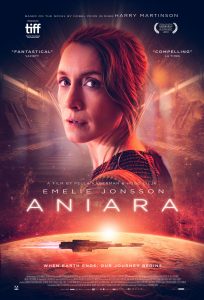 Earth is burning, and the answer is to move the surviving population to Mars.

The final shuttle ride from the doomed planet blends the humdrum with the remarkable: a mum tries to make her child understand the finality of what they’re doing and wave at their old home (“want to say bye-bye Earth? … you’ll regret it if you don’t!”), while other passengers are resigned or simply keen to leave. Some have burn injuries.

The shuttle takes them to the spaceship Aniara, which in turn will transport them over three weeks to their new home on Mars and a new life, where humanity will have the chance to do the same thing to a new planet all over again.

Those three weeks can easily be filled with the distraction of leisure and shopping, and the spacecraft most reminded me of Heathrow Airport – it too is a cathedral to consumerism, catching passengers’ money as they pause in transit. But it’s also claustrophobic because you can’t escape, so distraction and soothing become even more important.

Based on a poem of the same name (a poem with huge significance in Sweden) Aniara has been an opera and a TV show, but never a feature film.

Originally written by Harry Martinson (later Sweden’s poet laureate) as a response to the hydrogen bomb tests, it is just as relevant now; directors Pella Kågerman and Hugo Lilja have turned it into an allegory for climate change and consumerism, and how they’re linked.

Aniara brings home the terror of what climate change could mean precisely because, apart from the fact that this society is technologically advanced enough to evacuate to Mars, everything looks so current; not super-modern, or space age. Clearly that’s partly budgetary, but it also means we see ourselves reflected much more clearly and don’t have the luxury of thinking that a futuristic setting means we have time to spare.

The film’s main protagonist is the Aniara’s Mimarobe (an excellent Emelie Jonsson), who manages access to the MIMA – a sentient computer programme which senses memories, soothing and reassuring its users with nostalgic flashbacks of the planet they’ve escaped. After little initial interest in MIMA among passengers looking forward to their new lives, once disaster strikes, queues build as people realise the implications of what has happened.

Soon even the MIMA can’t cope with the influx of uneasy passengers and shuts down.

Disaster hits the Aniara in the form of a barrage of space junk, and particularly one tiny screw which results in all fuel being ejected to save the ship. Now she’s unsteerable, though the Chefone (Arvin Kananian), or captain, reassures them that in only a couple of years they’ll come across another planet, whose gravity they can harness to bounce them back into the correct flight path.

For the passengers two years sounds unthinkable, but two years stretches to three, then four, then more. And although the ending is a belter, Aniara – the spaceship is clearly meant to be Earth itself – is more about how the passengers cope with the dread of their new future, a future it’s too late for them to affect.

With air to breathe and (probably disgusting) algae to eat, the Aniara’s passengers won’t succumb to suffocation or starvation, but minds begin to crumble as they start to face their future.

As the years pile up suicide, hedonism and religious cults take hold. These new distractions appear one by one, like those stages of grief people who know they are dying are meant to go through before they reach acceptance.

Their fallback on cults and God is predictable, as God was already invoked everywhere in their talk of planets as celestial bodies before anything even went wrong. He’s a final failsafe that crumbles to dust.

In their heads people cope differently, though their fate is destined to be the same. The Mimarobe combines positivity and sheer doggedness and one assumes that if rescue never comes, she’ll be the last one left to turn off the Aniara’s lights.

Initially sharing her quarters is an astronomer (a bleakly hilarious Anneli Martini), the terrifying voice of reason and science as all around her take refuge in cults, the remnants of consumerism and the reassuring words of the paternalistic captain.

There is no celestial body waiting to save them, she says. She means a planet whose gravity they can use but really she’s a Richard Dawkins for our final days.

Later the Mimarobe starts a relationship with Isagel (Bianca Cruzeiro), one of the pilots, and they have a baby, but while the Mimarobe always looks for purpose to keep her going, Isagel falls into despair.

The astronomer balances out the initially authoritative, and later authoritarian, Chefone. His journey is understandable, as he tries to manage the flow of information for passengers’ own good. But paternalism can only ever be a temporary solution. “Maybe we shouldn’t have said it’s a rescue probe?” the engineer asks the Chefone after excited passengers and crew have spent months waiting for a mysterious object heading towards them to dock with the Aniara.

Aniara is a fascinating and – in its existential gloom – frankly terrifying study of what we need to live and how easily we destroy it.

This is low budget sci fi, and it does look like they’ve had to work with what they had. It’s a stunning achievement though, tackling the biggest of enduring themes, and the most pressing of planetary concerns. I was thinking about it afterwards not because of its limitations but because of its absorbing characters, compelling questions and bold scope.

I liked the nods to our attempts at saving the planet, which have previously been back-patting gestures and are now essential: sheets are used to cover bodies after a mass death on board, with an order to wash and reuse them (recycling!) afterwards.

And the MIMA, serving the opiate of nostalgia, before collapsing under the weight of humanity’s need. (This is a very female-focused film. Even the MIMA is a she, soothing and reassuring before giving up in disgust. )

This is philosophical sci fi. The gobsmacking ending shocked me when it shouldn’t have, though really the ending isn’t the point. There’s always air to breathe and algae to eat. But simple existence isn’t enough, however long that lasts.

For a spoiler about what happens at the end, scroll down…

Check out my interviews with Aniara directors Pella Kågerman and Hugo Lilja, and actor Arvin Kananian (the Chefone).

Spoiler: Okay. it’s depressing. Over five million years after the ship launched, with everyone (understandably!) dead, it reaches a new planet which looks like Earth but isn’t (I know, I checked with the writers!)