You are here: Home / Film Reviews / Walk With Me 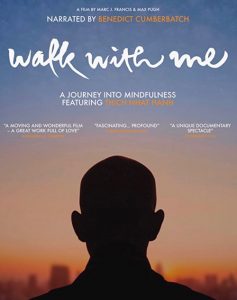 “Silence can be thunderous… silence can absorb all sounds” says a nun at Plum Village, the monastery set up by the Zen Bhuddist teacher and peace activist Thích Nhất Hạnh. It’s based in France, after Hanh was exiled in the 1960s for speaking out against the Vietnam War.

I’ve always been fascinated by films about people who live the opposite life to me. John Wick when I’m the world’s most cautious driver, Everest when I’m terrified of heights, zombie movies when the idea of stomping around in the same outfit for ever more fills me with horror.

And dear god, I love talking; I even type really loudly, so how could anyone choose… silence? The answer of course is that at Plum Village there is rarely silence, as not speaking simply amplifies the sounds we usually miss. They are often more melodic than expected (the thick rustle of monks and nuns standing after prayer). Though admittedly not always (the crunch of teeth on a piece of breakfast toast).

Plum Village is home to monks and nuns dedicating their lives to Nhất Hạnh’s teachings, specifically the learning and adoption of mindfulness. Every 15 minutes the clock chimes, and everyone stops what they are doing. The silence is a way to reposition yourself in the here and now, to stop yourself falling into the easy habit of continuing a task on autopilot without appreciating that moment. (Though personally I love autopilot, the gentle repetition where instinct and muscle memory take over, the drifting into daydreams.) Eventually, a life of mindfulness is a life free from worry and suffering.

Walk With Me is narrated by Benedict Cumberbatch, though he doesn’t narrate so much as read from Nhất Hạnh’s book, listed at the end as Fragrant Palm Leaves: Journals 1962-66. The excerpts chosen are beautifully poetic, and he relates them with nuance and meaning. Though only using the voiceover for this means it takes a while to get a handle on the film. (And if I’m honest I’d prefer to hear other types of narrators’ voices. The monks and nuns seemed to be from many backgrounds so a less RP accent would be welcome.)

I’ll admit I knew little about Buddhism or even mindfulness (I’m far too busy to read about how to slow down) but the structure of this documentary mean you have to pay attention and travel at its pace to find out more about Hanh’s teachings, and how Plum Village works day to day.

I suppose everyone has a point at which we say “I could never do that” when it comes to other lifestyles, and I’ll admit mine is hair. Watching new nuns having their hair slowly cut and shaved off was much harder than I imagined, probably as, like many tasks at Plum Village, it is done slowly, with self-assurance and symbolism.

Their home is functional but not spartan, colours muted but not dull. All religious leaders know that the right location makes it easier to believe, and at Plum Village it certainly looks very peaceful. Daffodils bloom in a carpet beneath widely-set trees. A lady bird crosses a tiny stone. Outside the protection of the forest, trunks have been pushed by the wind but they’re still standing strong, if at an angle. The sun shines, snow falls.

It’s a while before much happens, when Nhất Hạnh and some of his monastics travel by plane to America.

Amid the yellow taxis and beeping horns, a group of them walk very slowly up one of the Big Apple’s avenues, filling the path with their stately progress.

Their measured, deliberately unhurried pace certainly slows everyone else down too, not so much in the frustration you feel when you get stuck behind a slow walker (I am the world’s fastest walker so that’s basically everyone) as open-mouthed amazement that people would deliberately walk so slowly in NYC.

A woman is preaching the gospel in Central Park, while warning people not to put their faith in other prophets or indeed Buddha. Another woman comes up and argues with her. Meanwhile the monks and nuns sit quietly and contemplatively. It’s an interesting scene. They don’t ask anyone to defend them. But how much do they shed unnecessary responsibilities and shackles and how much do they move them onto other people?

While in the US, they visit a women’s prison, where inmates ask all the intrusive questions I wanted to; about sex, romance, money.

Directors Marc J Francis and Max Pugh do a decent job revealing the personalities and individuality of the monks and nuns, even as they’ve accepted a community-minded life. A Yoda figure sits in one young man’s bedroom; and there’s an unexpected reunion when one of the monks is recognised by an old friend from the city where they grew up. Both are by now middle-aged, the friend convinced the monk had died.

And I loved the line of quiet, comtemplentative monks, standing with their eyes closed, except for one young man who cannot stop fidgeting, like a small boy in church as his family pray. He rubs his head over and over, turns around slightly, yawns and yawns again. It’s rather sweet.

Nhất Hạnh is seen answering individual’s questions about how mindfulness can help them, and gives a perfectly pitched response to a small girl who wants to know how to stop being sad about the death of her dog.

This is a rather meandering film, slow but its slowness not as deliberately measured as its subjects’ is. At times it’s frustrating as the story unveils so gradually. And I never felt it really got to grips with the internal struggles the nuns and monks must encounter. What does living in the present mean for memories, for aspirations and ambition?

Still, it’s a beautiful film, about an extraordinary man. It possesses a gently hypnotic quality that was particularly welcome as I watched, the chaos of the school holidays unfolding around me. Cumberbatch’s voiceover only adds to that, as it lulls you into a sense of here-and-now contentment.

buy / rent Walk With Me on amazon video from amazon.com

buy the walk with me dvd or blu-ray from amazon.com

Watch the Walk With Me trailer: