You are here: Home / Film Reviews / Valley Of The Dolls 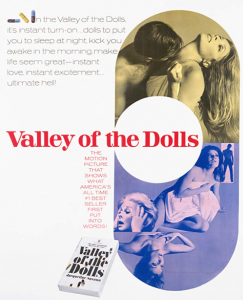 I knew the clothes would be terrific when I spotted Handbags by… in the opening credits. And it’s the outfits (along with the unintentionally fevered atmosphere) which stretches this film up to two stars.

Small town girl turned New York secretary turned Hollywood model Anne Welles is elegant in a yellow maxi dress, a tight ruffle running all the way down one side from shoulder to hem.

Ageing superstar Helen Lawson rules her party in a green, bronze and gold fitted trouser suit with a green scarf tucked into her neck and a head of russet curls.

Raw singing sensation Neely O’Hara rocks rehearsals in a black leotard, black tights and a striped shirt casually tied over the top – once she’s made her money she’s strutting in a stunning glittery silver coat.

I’d happily wear everything in this movie, though I draw the line at the hair, which mostly seems to be wearing them. Their barnets become more and more formal, until some of these pretty 20-somethings end up resembling a brunette Margaret Thatcher.

This is ostensibly about three young women who become friends, though their burgeoning friendship isn’t particularly well-drawn.

Anne (Barbara Parkins), newly arrived in New York, has a rare self-possession that presumably comes from her inexperience and naivety (and poor writing). She’s also very lucky, as her first interview leads to a job as a secretary for a theatrical lawyer, Bellamy, whose handsome nephew Lyon Burke (Paul Burke) soon becomes her boyfriend.

“I don’t know who I am or what I want, I only know I have to find out” Anne tells Lyon at the beginning of their on-off relationship. (Paul Burke is my new dead actor crush – he reminded me looks-wise of Hugh Jackman.)

A trip to get Bellamy’s client Helen Lawson to sign some contracts leads to Anne first spying Neely. Also in the city is Jennifer (Sharon Tate), with her succession of rich boyfriends.

Neely, whose rise and fall anchors this story, is never more attractive than at the very start in that leotard, before fame and pills ruin her life. Bouncing up to the microphone in a theatre rehearsal room, she’s full of life with a breeziness that is later drugged out of her. Patty Duke, who plays her, is also never better than at this stage; entirely natural, before the overwrought script and direction leads her down melodramatic alleys that are more laughable than heart-rending.

Jennifer is sweet and pretty, sending money to support her mother who does nothing but point out that her daughter has no talent. She eventually marries lounge singer Tony Polar (Tony Scotti), but his ill-health leaves Jennifer with such huge hospital bills she moves to France to star in “art films”.

Lyon is a terrible boyfriend and refuses to marry Anne, but a new career as the Gillian Girl, modelling make-up and hairspray, brings her a new rich boss as a boyfriend. (She also never looks worse than when done up for those ads.)

Despite burgeoning careers, all three are also relying on “dolls”: pills to lose weight, pills to perk them up and pills to help them sleep because they’re too perked up.

Neely moves from cheery unknown with her single bed in New York to a California mansion with a pool. The pills are her downfall, but she’s stuck in that vicious circle of employing leeches who direct her career in ways that require more working to keep paying for the leeches. It’s an age-old story, and you can at least see how Neely gets snared by it.

She’s increasingly erratic on set, though while the pills leave her a screeching mess the reasons for her anger are sound. There are elements here which show us what this could have been: “when a man says he won’t do a lousy scene that’s called integrity. When a woman says it, she’s temperamental” she complains, accurately.

Mostly, though, the dialogue is so silly and one-dimensional Duke has to resort to histrionics and melodrama. Scenes which should be moving or upsetting become laughable. (Neither Anne nor Jennifer have as much emotional weight to carry in Valley Of The Dolls, despite a script dotted with break-ups and tragedy. Parkins’ performance is so self-contained as to feel one-note; Tate is rather touching.)

The women are often bitchy and often shrieking. Helen Lawson will do anything to defend her position as New York musical theatre’s Queen Bee and early on cuts Neely’s song from her show as the younger woman is already shining too brightly (it doesn’t work – Neely is simply too talented to be held back and Helen knows it).

Is Valley Of The Dolls, as many critics have stated, so bad it’s good? Or not bad enough to reach high camp heaven? There were many scenes that left me wincing. And it’s far too long, at two hours. There’s no clear timeline – this is not a film that feels coherent, as people appear then vanish, and there’s often no clear reason for them to act the way they do. Apart from Neely, there’s no obvious slide into drug abuse, yet apparently all the women are at it all the time.

I did love the Grammy awards ceremony though, which looks like if Hollywood did a British church fete; the tiny awards set out on a couple of tablecloths. The movie’s songs are fabulous as Patty Duke belts out the numbers, grinning with delight, and the 60s montages are great fun.

Somehow, Valley Of The Dolls manages to be both quintessentially 60s and incredibly old-fashioned. The melodrama plays out like something from a decade or two earlier but the clothes and hair pin it firmly to the 60s.

rent / buy valley of the dolls on vod from amazon uk

rent / buy valley of the dolls on vod from amazon.com

Read my review of The Haunting Of Sharon Tate

Watch the trailer for Valley Of The Dolls now: