You are here: Home / Film Reviews / The Haunting Of Sharon Tate 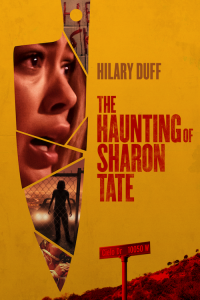 “I’m already dead” pleads Abigail Folger to her killer, and it’s a line that sums up this story, a bloody, febrile Groundhog Day with a twist as Sharon Tate foretells her own brutal murder and those of her friends in her dreams.

Tate is most definitely haunted in this film, though we’re haunted by her too, her murder continuing to fascinate. The horrific events of that night in August 1969 shone a light on both the 1960s counter-culture and how much cult members are responsible for their actions. This year – the 50th anniversary of the murders – there are four films about or featuring Tate coming out.

The Haunting Of Sharon Tate is certainly an oddity, built around a hideous true life murder and an invented twist that plays out with a delirium that sometimes works. It’s rather compelling, though it’s also exploitative.

And while it has a lot of issues (particularly with dialogue), there are a few neat touches, with a premise that doesn’t always play out as I expected.

Sharon Tate (Hilary Duff) has just returned from London at the start of the film, her husband Roman Polanski left behind to work on a script. Her friend Abigail (Lydia Hearst) and Abigail’s boyfriend Wojciech Frykowski (Pawel Szajda) have been staying in the hilltop bungalow, and they’ve certainly been making themselves at home.

In a move determined to enrage mums the world over, Abigail has gone ahead in Sharon’s absence and furnished the nursery, complete with giant cuddly toys, as a surprise.

And while Sharon is initially pleased with the company, and the protective arm (literal and figurative) Abigail wraps around her, soon the couple’s liking for Sharon and Roman’s champagne, and their increasing tendency to make changes not within their remit, is pushing the two friends apart.

Sharon – pregnant, hot and increasingly unnerved by an atmosphere in a house she previously saw as a safe haven – starts to break down. People knock on the door looking for old residents (the list of celebrities who used to live there is long). Faces appear at the window. Strange noises disturb her sleep. She finds recordings that played backwards reveal secret messages.

Increasingly terrified for herself and (mainly) her unborn baby, her grip on reality is lessening even as the real world is about to unleash its own nightmare.

Everything I’ve read recently about the late actress centres on he sweetness and good humour, after years of her being simply “Roman Polanski’s wife” and a Manson victim. And while so much of this film is entirely made up, Duff is at least dreamily ethereal and unthreateningly beautiful as Sharon.

Tate is starting to ask those big questions that often pop up during pregnancy, when the realisation that you’re actually producing a baby human leaves you wanting answers: about life, fate, and God.

Sharon’s main focus is whether we can change our futures or if everything is already predetermined. Her best friend, Hollywood stylist Jay Sebring (Jonathan Bennett, rather good) already has it all thought out: “no matter which road we choose we always arrive at the same place”.

Jay is a terrific bestie, always with her best interests at heart, not wanting to leave her at the mercy of her sybaritic house guests and whatever fears are plaguing her.

Winding around her psychological distress are her fears for her marriage. Polanski is apparently constantly unfaithful, their arrangement she explains to Jay as “Roman lies to me and I pretend to believe him”. Apart from Jay she really has no one on her side.

Sinister reality begins to bleed into her imagination. After finding their pet dog dead on a walkers’ path high above Los Angeles, the bloodied body surrounded by flies, Sharon later sees a maggot-filled animal in her fridge which isn’t really there.

For a film based on a fantasy, the styling feels very realistic. Set in 1969, the house and everyone’s clothes look sweetly 60s but also rather ordinary and lived in, with soft furnishings a mixture of patterns and styles. You can imagine Tate creating that kind of home.

The colours have a washed-out look to them which adds to the sunny, laid back ’60s vibe, and contrasts with the sheer gut-wrenching brutality of the violence that comes later.

The film is also good on pregnancy, with Duff looking exhausted and overwhelmed, and – crucially – physically limited by her enormous baby bump. One of the frightening things about being heavily pregnant is that fear of being so slowed-down physically by the growing baby, you won’t be able to defend him or her if you need to.

It’s let down by clunky, exposition-heavy dialogue though, particularly in the first minutes. Additionally, Sharon’s musings over fate come across as if she’s reciting something rather then genuinely trying to untangle life’s big questions in her head. Later, when she meets their new caretaker, Steven Parent (Ryan Cargill), a young blond man with a penchant for modern technology, the tone veers all over the place. It almost seems like a black comedy.

The horror is fevered, if not overblown considering the grisliness of the real murders. Though some of the tricks during the build up, as Sharon becomes increasingly fearful for her and her baby’s lives, are way too over-used to be scary. The music is loud and jarring, and frequently pierces slowly-building tension.

Any feeling of growing menace really comes from that house. In theory a place of great privilege, its isolated spot looking down on the city becomes a frightening prison too far from help.

rent The Haunting of Sharon Tate on vod from amazon.com

buy the haunting of sharon tate from amazon uk

Read my reviews of Valley Of The Dolls, starring Sharon Tate; Once Upon A Time In Hollywood; and Charlie Says, about the three women imprisoned for the murders of Tate and others.


Images from The Haunting Of Sharon Tate