You are here: Home / Film Reviews / Trick Or Treat 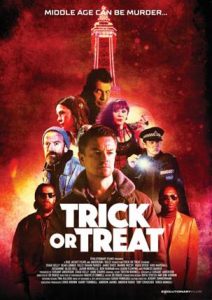 I loved the characters in Halloween crime thriller Trick Or Treat, particularly new dad and ex-criminal Greg – who moans so much about the dullness of life with a wife and new baby he doesn’t even let up while driving round with brutal henchman Clarence in a quest to find his ne’er-do-well brother Dan, and hence save his little family from death.

Greg (Craig Kelly) comes across as one of those men who claims they’re babysitting as soon as their wife leaves the house to pop to the shops.

To be fair that’s not all he’s struggling with. Having moved back to Blackpool from London, he has no job, and still hasn’t reconciled himself to a lifetime of psychic visions despite his fed-up wife Gemma (Maimie McCoy) telling him “you’re not a visionary, you’re an ex-raver who necked too many pills”.

Luckily while I can’t say I really cared what would happen to Greg, it didn’t affect my enjoyment at all. While there are issues with the film’s start and ending, I was certainly gripped by the twists, turns and red herrings, most of which work well.

It’s Halloween and the day before Greg’s 45th birthday. A couple of trick-or-treaters turn up, then a weird Scottish Grim Reaper, though Greg gives as good as he gets. He gets load of semi-mystical codswallop and gives the guy what looks like a chocolate eyeball. (That’s not a euphemism by the way. It’s Halloween candy, as the Americans say.)

Then his brother Dan turns up, who he hasn’t seen in months after a fall-out. Dan thinks he’s accidentally killed someone, and has put the body in his car boot, but things go from bad to worse when two men turn up from Greg’s past life as a Blackpool gangster: the suave and well-dressed Clarence (Shaun Parkes) and Lesley (Jamie Sives), a silent bearded colleague who later turns out to be well-versed in the works of Marcus Aurelius (“that fella in ‘Gladiator'” says Greg, speaking for all of us really).

Dan’s victim is none other than Baxter, the grown-up son of local crime boss Miss Ferguson (a gleeful Frances Barber, clearly having a ball). And as a fellow middle-aged woman, seeing Miss Ferguson scare the living daylights out of both Greg and Clarence made my Halloween.

It turns out Greg is an ex-criminal who got out of this world, but Greg, I should tell you, if you dip so much as a pinky back into this pond, you may well find something reaches out and drags you back into its depths. Sorry, I came over all John Wick there for a minute.

This is Blackpool not New York, and the nearest they have to The Continental Hotel is a dark red restaurant where Dan’s ex-girlfriend Karen (Jessamine-Bliss Bell, an absolute hoot) makes her living as a living platter, lying naked on a table while stag weekenders eat sushi and fruit off her body.

Well at least it’s healthy. The last time I went to Blackpool, in about 1996, they’d have been noshing chips and extra batter off her boobs.

And while Greg would probably love to be the North West’s answer to Wick, what’s interesting is that he clearly really loved being a gangster and misses the life, even as his family’s lives are at stake.

We know early on that Dan is a liar, his story about how he came to have a body in the car changing quickly. Later Greg, used to having the upper hand in the relationship with his brother, starts to wonder whether the whole thing is an elaborate scam, after he’s told that Dan is having an affair with Gemma.

The script pulls us this way and that: is Greg is being set up so Gemma and Dan can run away together, or are the night’s events an elaborate game with a reveal about to occur? (An idea reminiscent of 1997’s Michael Douglas blockbuster The Game.) Meanwhile his mental state worsens as drugs and dreams make him further question his reality. 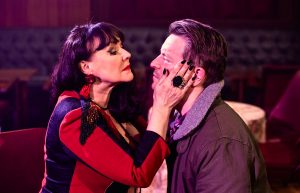 The film’s themes of sibling rivalry work well (Dan is Greg’s gangster mini-me), and Greg’s struggles to adapt to fatherhood and marriage will strike a chord with many couples.

There are plenty of fun, famous cameos. Kris Marshall pops up as a policeman, Jason Flemyng as a taxi driver, and Hugo Speer as a dodgy 70s-style comedian in a terrible wig who talks to Greg through his TV.

Craig Kelly is terrific as the moany, yet dryly funny Greg, who may be terrified about the fate of his wife and child but is far more relaxed in that underground world than in his smart terraced house with his family. 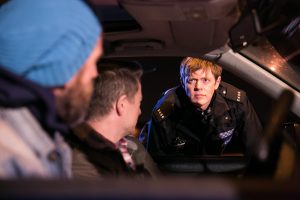 The standout performance through is from Shaun Parkes (great last year in Jessica Hynes’ The Fight) – Clarence is properly menacing without being a stereotypical hardman, not an easy balance in a low-budget British crime thriller. Parkes absolutely nails it and watching him onscreen was always a pleasure (I just wish we’d had more of him, and in more outfits).

The hierarchy in the gang is well done: Clarence menaces Greg, teasing him while Greg, unsure at the start what is going to happen, tries to find common ground, grasping at Clarence’s fake bonhomie. When they get to Miss Ferguson’s lair, Clarence is in the same position as Greg was, on edge and on the back foot.

The script, while mostly good, could have done with more finessing in parts; the beginning, where Gemma and Greg argue over their lives amidst much exposition, doesn’t always work, and the ending feels silly (and derivative). The occasional nods to horror and the question over whether Greg’s visions are supernatural or drug-related feel unformed rather than nuanced.

Despite these gripes, overall there’s a lot to enjoy in Trick or Treat: terrific performances, fun cameos, and mostly realistic dialogue (even the quirky characters feel believable). I loved the styling, particularly Miss Ferguson’s lair; Blackpool, with its pastel-pretty light displays and grimy backstreets, makes an effective backdrop.

Trick or Treat is pacy and lean, an intriguing and entertaining British thriller that keeps to its remit and remains gripping almost to the end.

Watch the trailer for Trick Or Treat: