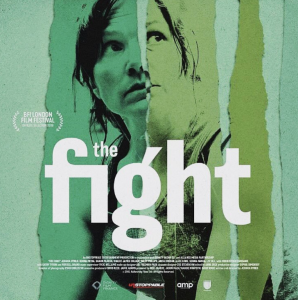 There are plenty of altercations in Jessica Hynes’ directorial debut, both internal and physical; as mum Tina fights her past and her resultant self-worth to stand up and take control, by climbing through the ropes into the boxing ring.

Boxing is a deliberately physical approach, considering the story that unfolds about Tina’s childhood, and her family’s ongoing battles – controlled and channelled violence as a force for self-esteem.

She’s helped, once she’s shown some commitment, by boxing trainer Viv (Cathy Tyson) who tells her “first lesson, give up guilt”.

That’s a hard ask for any frazzled mother but particularly for Tina ( Hynes); though nothing is as clearcut as it first seems.

And Tina’s past begins to bubble up just when she needs a clear head to help her oldest child Emma (Sennia Nanua) who is being physically and emotionally bullied at school.

It’s Tina’s many problems that send her towards the boxing gloves in the first place. Individually each family issue is manageable; together they feel overwhelming, her existing attempts to manage her life an exercise in firefighting rather than taking control.

The Fight may initially unfold in an expected manner but it doesn’t stay – or end – that way. A twist in its tail was genuinely surprising to me, a shock that jolts but doesn’t feel forced.

Before she hits the boxing ring, Tina’s response to the pressures in her life (marriage, three children, work, parents) is scattergun and hectic.

One minute she’s listening to a mindfulness app (voiced by Russell Brand – he also pops up very briefly later), then it’s running, a workout class or a cheeky cigarette on the way home. Though as events unfolded, increasingly I wondered how much Tina really wants to be calmly in control, when control requires ownership of a problem and her frenzied activity actually helps her forget her own past.

Her job in a care home seems to be the least stressful part of her life, giving her moments of quiet calm and pleasure that her mindfulness app fails to offer. Watching her carefully helping elderly residents chat or shave is rather lovely.

Her husband Mick (Shaun Parkes) is very hands on but works nights, and she’s so tired she falls asleep on their bed in her clothes. Added to that are the usual child rearing issues of kids who run in the opposite direction when they should be getting dressed for school, or demand to walk there alone. (Both of these I tackle every single morning with my 6 year old and 9 year old, and yes I do love a health-boosting run followed by the odd cigarette. It’s about, balance isn’t it.)

The pressure increases when Emma, a talented writer, confides in her parents that she’s being bullied at school by schoolmate Jordan (Liv Hill), whose mum Amanda (Rhona Mitra) was at school with Tina.

Amanda is a loose cannon, drinking all day and as angry as her daughter, and there’s clearly bad blood between both mums.

Emma’s parents disagree on the best approach to the bullying; Tina’s response is firm but also jumps the gun, instantly talking about home schooling. Meanwhile Tina’s parents’ marriage is reaching breaking point and her own relationship with her mother (Anita Dobson) turns out to be more complex that it first seems.

The Twist (which I’m not going to spoiler it for you) isn’t really explored though it’s not exploited either.

Bullying is a key theme but there’s little questioning of whether bullies can or should leave their past behind. It’s a strength as what makes The Fight realistic is that the threads aren’t all neatly tied up at the end. The movie feels like a small, intimate slice of British life, and within the confines of its budget and its time and place, it tells a strong story about taking control. But it does make it a frustrating watch at times.

The Fight is an impressive achievement though, even more so considering Hynes is writer, star and director. Shot in 12 days and with a budget of around £140,000 (that’s not even low budget, it’s micro budget), it never feels as if she’s spread herself too thin.

Hynes is a confident director and her portrayal of Tina is entirely believable. I particularly liked her desperate attempts at selfcare that only serve to deflect from the real issues while she kids herself that she’s doing something. It reminded me of when I used to try different diets several times a day – low carb, high carb, low fat, blood type – without ever working out why I ate too much.

Liv Hill and Sennia Nunua are excellent as the bullying and bullied teenagers; Jordan is an expert manipulator but Hill highlights her desperation for some kind of control and for people to like and respect her, something she doesn’t get from her mother.

Nunua’s is an incredibly assured performance as Emma is forced to put up with constant belittling from her ex-best friend, and then deliberately make herself vulnerable with her writing.

Hynes (who did a lot of the location-finding herself) makes the most of her seaside town environment, from grey streets to clifftop flower meadows. Tina runs up long stone steps lugging shopping, or through streets loomed over by a towering viaduct. There’s one long-shot sequence in a wooded valley; paths on different levels give the beautiful natural environment a stagey quality, as characters stand on different levels talking and eavesdropping. (Cinematographer Ryan Eddleston has done a terrific job – he also shot Alice Lowe’s hilarious unborn baby revenge fantasy Prevenge.)

The Fight isn’t a comedy though unsurprisingly Hynes has included some witty dialogue. The two funniest scenes are a conversation between Tina and Mick about Tina’s imagined affair with a nonagenarian (included to mark out their relationship, as much an easygoing friendship as husband and wife – Hynes and Parkes have fantastic chemistry), and Alice Lowe’s well-meaning but dim home schooling group leader. Determined that everyone’s skills be acknowledged no matter how weak (jumping, for example), she comments that “we have one rule and that’s no hitting. Because violence solves nothing”.

Certainly by the end violence in its natural state has solved nothing. The Fight doesn’t end with everything nearly tied up, and though several characters have developed a backbone, I still felt sorry for others. This is a small-scale slice-of-life drama, a nuanced film that looks at what’s gone unsaid, and how we can take control of it when we can’t suppress the truth any more.

Read about my chat with Jessica Hynes here.