You are here: Home / Film Reviews / Ref, The 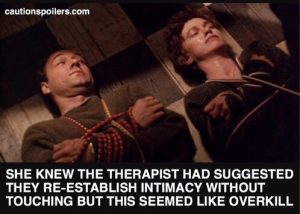 A film so bleak even Krampus had to watch Elf immediately afterwards to bring back a little Christmas spirit into his life, The Ref performed poorly when it was released.

Probably because it came out in March, rather than during Christmas when movie goers driven out of their own homes by bickering relatives might want to feel better by watching a film about a family worse than theirs; and also because it sounds like a football movie.

Christmas was originally based on a festival designed to bring light into the dark winter months, so there’s something misanthropically pleasing about movies that bring misery and darkness into our glittery, huggy, festive celebrations.

And of course for those of you concerned that prison doesn’t work for hardened career criminals, The Ref can only boost your arguments for community justice. Even the toughest jail fans would surely accept that poor Gus has suffered enough by the end of his night with warring couple Caroline and Lloyd, their horrible son Jesse and evil Grandma Rose.

“Mary, gag your grandma” is not a line I’ve heard before in any genre of films ever, not even the really dodgy ones. But Grandma Rose (Glynis Johns) is so unpleasant and argumentative you start to understand why the rest of the family are like they are, and why Gus the hostage-taking burglar is in for such a long night one Christmas Eve.

The Ref is one of those underrated and not much seen Christmas movies which festive film fans adore. It’s rude, loud, funny and (apart from the home invasion by a gun-toting jewellery thief bit) remarkably realistic about families and Christmas.

Gus (Denis Leary) is doing the mythical “one last job” – burgling a house and stealing jewellery – when, having narrowly escaped capture, he discovers that his useless partner in crime is not there with the getaway car.

Coming across Caroline (Judy Davis) in a grocery store he takes her hostage, at that stage completely unaware that he is about the spend Christmas Eve refereeing the most argumentative couple in history.

Not only that but their son – on his way home from military school (boy, does it become clear why they sent the irritating little git off to military school) – is a blackmailer, and her mother-in-law Rose, en route for a family Christmas, is the From Hell variety. Then there’s brother-in-law Gary (Adam LeFevre) and his wife Connie (Christine Baranski) who pitch up with his mum and their two kids half way through the film to stay for Christmas.

By the end you’re just rooting for poor, misunderstood, gun-toting, threatening criminal Gus to escape and get to spend a nice quiet Christmas somewhere with perhaps a cute dog.

Rewind to earlier on Christmas Eve and Caroline and her husband Lloyd (a brilliantly smug, stubborn and uptight Kevin Spacey) are at their counsellor Dr Wong’s office.

The only thing they agree on is their mutual dislike for one another, and though he still hasn’t forgiven her for having an affair he won’t let her have a divorce.

Lloyd is so smug he makes Richard Gere look ever so slightly unsure of himself. Tied up in their house, they watch Gus drink their whiskey but try to keep their ciggie stash secret (they’re recent ex-smokers, or as I call them, smokers).

Jesse’s return home proves to be just as annoying as his parents. Genetics? Learned behaviour? Who knows, but you’ll be astounded Gus manages to hold off from shooting him. He manages instead a remarkably restrained “what this family needs… is a MUTE”.

Caroline’s Scandinavian-themed Christmas Eve dinner can’t be cancelled. Like many (most?) family meals over Christmas, it’s a disaster, with Caroline offering up a feast of intricately prepared dishes that all have to be explained in great detail, all the while with everyone wearing greenery crowns stuck with lighted candles on their heads. The bickering of course never stops.

Unsurprisingly when Gus finally holds a gun to her head, “go ahead, shoot her!” is heard from within from the assembled argumentative throng.

Denis Leary, though he is rather one-dimensional in this, plays Gus with enjoyably shouty determination. Judy Davis and Kevin Spacey are excellent as the sparring couple, who genuinely can’t abide each other but gradually let each other see through the odd chink in the armour each has constructed against the hurt and neglect that has built up over so many years of troubled marriage.

Spacey is delightfully loathsome as Lloyd, particularly at the beginning; the kind of man you might actually want to stay wedded to just to wind him up by deliberately committing a series of irritating middle class faux pas throughout your married life.

Christine Baranski is always good value and can bulk out a lightly drawn character so easily to make them believable. And Glynis Johns as the awful Rose is terrific.

Ted Demme’s film is rather uneven in places – the film is most effective within the home, and the scenes outside it don’t really work. Though I could’ve watched the extended family arguing over Christmas leftovers and new year drinking for weeks.

I was rather hoping that Caroline and Gus would fall in love and run off together at midnight, still wearing the candle crowns but sadly they don’t. Is it a spoiler to say something you’ve just made up doesn’t actually happen?

The ref is available from amazon uk on vod and dvd

buy / rent the ref on vod from amazon.com