You are here: Home / Film Reviews / The Nightingale (Sundance London) 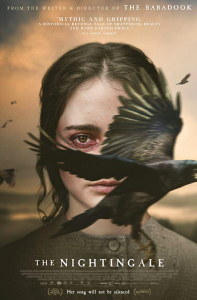 It’s an easy get-out, to anoint a movie “a hard watch”, but Jennifer Kent’s period revenge thriller The Nightingale is just that.

I went in with no other information beyond this being a follow up to The Babadook, a horror film about a menaced, powerless child but really about loneliness and grief.

This is, in its way, also about powerlessness and grief; though more about whether that grief-driven urge for revenge can ever be right (and also, whether it can work, beyond being an immediate deflection technique).

The Nightingale is utterly brutal, with a heavy atmosphere of menace even as the sun shines brightly down or we’re traversing the cool forests.

There are many sexual assaults, though its rapes are not remotely explicit. Over the years I’ve seen nastier films with fewer attacks but which are clearly exploiting women’s trauma with sexual glee – this is not one of those. Their shock is still visceral though, and this is a movie that some will simply find too upsetting to sit through.

There’s a fine line between depicting historical violence realistically in all its horrors and blunting its impact, and it’s a line Kent traverses sometimes clumsily – The Nightingale‘s long running time doesn’t help.

Setting her film in Tasmania in 1825, Kent (who wrote and directed) shines a light on British racism and misogyny, and its legitimising of personal brutality; as two victimised and traumatised people band together against a vicious and sadistic British army officer in a system that has left them both almost powerless.

Clare (Aisling Franciosi) is a young Irish mother living with her husband and baby daughter; she’s an ex-convict, and has been promised a letter from British Army would-be captain Hawkins (Sam Clafin), that will essentially give her freedom. The callous Hawkins uses her need for it against her, refusing to provide it when he returns to the military post where she works.

Hawkins too feels powerless in his world, his next promised posting always just out of reach – so he finds people more vulnerable than him and rapes and beats his way to what he wants, forcing underlings to help him. It culminates in a scene so horrible (killing Clare’s husband and baby daughter) it left me feeling sick.

It’s a scene that, even if all you know about The Nightingale is that this it’s a revenge thriller, is signposted from the very start, adding to the feeling of heartbreaking, inexorable dread.

When Hawkins leaves the outpost to travel North and try to save his next posting, Clare sets off in rage-fuelled pursuit, with Billy (Baykali Ganambarr), an Aboriginal tracker, to show her the way. His knowledge of the forests blends straightforward spirituality and practicality. She’s out of her depth, propelled forward by fury reflecting off a broken heart.

Their friendship (if you can call it that – maybe alliance is a better word?) starts off very prickly.

Borne out of necessity, it’s initially characterised by mutual distrust and the power differentials of race. Clare treats Billy with disdain and condescension; and Billy regularly temporarily abandons her in the forest to go ahead. It’s only later as they get to know one another that she points out her Irish heritage and they accept that they’re both fighting the same genocidal oppressor.

It’s a nuanced relationship brought to life by Franciosi and first time actor Ganambarr, who delivers a superb portrayal of the traumatised but pithily forthright Billy.

Hawkins is ahead of them, travelling with a group that includes a young boy. Billy and Clare’s journey is signposted by Hawkins’ victims. (Clafin is frankly terrifying, as Hawkins’ complete lack of redeeming qualities is revealed.)

Trekking through the wooded country, it feels numbingly repetitive, even the violence. Murder is committed in an almost mundane fashion: of men, women, children.

There is little kindness here and when it does appear it shines like a light (one of the most touching scenes is when Billy uses his knowledge to help Clare when her breasts are still producing milk).

The forests look pretty and not particularly brutal; I’m not sure if this is intentional. It’s the lawlessness of the convicts working around every twist of the forest path, and the casual hate towards indigenous people and women, which makes it such a dangerous place.

Billy calls the British the white devils; they’ve stolen aboriginal lands and stole him as a child. He wants to go north to see if there are any of his tribe still there. Clare tells everyone she’s looking for her husband, a sliver of protection as she travels. Every white man they meet is a potential (and probable) threat.

He’s the blackbird, she’s the nightingale. She sang for the soldiers, soothing their unruliness. Women are often responsible for calming men down.

Without a doubt this is an unsparingly harsh film, though while I can’t say I enjoyed it, and wouldn’t choose to watch it again, it isn’t exploitative. The treatment of both Clare and Lowanna (Magnolia Mayruru), an Aboriginal woman Hawkins finds in the woods with her small child, is part of the story – the appalling treatment meted out to women (particularly indigenous women) by the British.

The violence highlights three things: the systemic violence against indigenous people in Australia by the British; the legitimacy this then gave individuals to do as they pleased; and Hawkins’ personal viciousness. As an individual, Hawkins is utterly out of control, a psychopath whose existence has coincided with a chance to act out his hideousness with nothing holding him back apart from the occasional senior officer or someone else meting out more violence.

This is a vital if very troubling film, made more of an endurance test because of its length – it comes in at two hours and 15 minutes, though it feels even longer. It could have been shorter, more manageable and still made its vital points about abuse and colonialism.

Watch the trailer for The Nightingale: