You are here: Home / Film Reviews / The Babadook 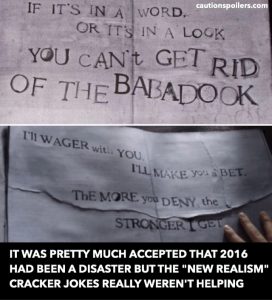 As six year old Samuel’s doctor says, “all children see monsters”. Or hear them, under the bed and on the stairs. It’s a response to something they can’t control, and a way of making sense of big events in their lives.

Most aren’t stalked through the darkness by a terrifying black hatted figure who wants to kill them though, and usually a couple of readings of Where The Wild Things Are is as bad as it gets in terms of scary books.

Not for poor Samuel (Noah Wiseman) and his single mother Amelia (Essie Davis), who are psychologically held hostage in The Babadook, a supernatural home and mind invasion thriller where you’re never entirely sure what is real and what isn’t.

I was expecting The Babadook to be a straight psychological thriller/horror, but it goes way beyond that; writer-director Jennifer Kent has created an enjoyably multilayered, menacingly disorientating story.

Amelia is a widow – her husband died taking her to hospital when she was in labour with Samuel and she still hasn’t recovered emotionally. She’s just about getting through each day while Sam’s behaviour at school and home is deteriorating.

A book called Mister Babadook, featuring a terrifying black-clad man, has mysteriously appeared in their home. Samuel is obsessed with it but the pictures and message are so frightening that Amelia soon tears it up and chucks it in the outside bin.

That a children’s book appeared in their house as if from nowhere isn’t particularly troubling in itself – most parents know their house is full of books that just seem to materialise with no one having any idea where they came from. (This is particularly true of The Gruffalo; has anyone ever actually bought a copy? I know I haven’t and we’ve got three different versions, the 2014 Annual and a biscuit cutter). However when I’ve finally chucked a book out it has never reappeared, sellotaped back together, on our doorstep.

The sense of menace in their home expands. Sam is scared and lonely but also angry and aggressive, building weapons out of boxes or watching creepy DVDs. His anger initially seems like an expected response to his bereavement, but as unexplained events occur, tantrums and convulsions start to resemble demonic possession: there’s glass in their food; Sam’s dad’s things are moved around in the basement with his suit found hanging there on a peg. Even the dog is starting to act weird.

Meanwhile his mother’s anger at him is leaving poor Sam isolated, a extra layer of horror in a genre where we can shout at adults on screen for making stupid decisions, but where children often have no agency to escape. Sam has only his own wits, his pet dog and his increasingly erratic and cruel mother to protect him.

Is Sam the Babadook? Both he and his mother are losing sleep, but the unexplained events – which could be as a result of their sleep deprivation – lead to even more exhausted, hallucinatory wakefulness. Soon it’s not Sam we’re worrying about as the source of evil, but Amelia.

A mother’s descent into madness is often a movie cliche but here it is a situation expertly wrought. First there are Samuel’s behavioural problems that isolate her from his school and from her own friends. Then it’s a belief that they’re being stalked. Then it’s a growing awareness and even acceptance of the frightening Babadook.

Is the Babadook real? Is it Sam’s father, and if it is then what on earth was he like when he was alive? Or is the monster’s manifestation not supernatural at all but simply Amelia’s ongoing grief, still not dealt with after seven years?

Her sister Claire tells her firmly that it’s time for Amelia to move on with her life after all this time, and dealing with grief sometimes seems like a disruptive state: an anger- and love-ridden whirlpool with no visible way out.

Noah Wiseman excels as the annoying, brave boy who actually copes admirably as his mother gradually breaks down. Essie Davis is so nuanced: terrifying yet pitiable as a mum holding it together on the surface but losing her grip on reality as she retreats physically and emotionally.

(By the way when it comes to animals suffering on screen, many people get more upset than when something awful happens to an actual person, so I’m going to tell you NOW that yes the dog gets it. I know and it’s so adorable!)

Is The Babadook scary? I’d describe it as very, very shocking rather than scary, with Amelia’s breakdown – particularly the callous way she speaks to her young son – surprisingly upsetting. Somehow hearing her tell Samuel to “eat shit” is as bad as seeing him threatened with a knife.

The ending was unexpected. There’s no sequel set up, thank goodness. I won’t say too much beyond that, but think Gardeners World crossed with Shaun of the Dead, which is not actually as bizarre as it sounds.

BUY / RENT The babadook on Vod or buy the dvd / blu-ray from amazon.com

Watch the trailer for The Babadook: