You are here: Home / Film Reviews / The Night Before 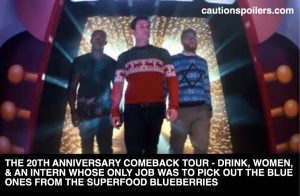 All these ghosts appearing, from Christmases Past, Present and Future.

The Night Before is a New York version of A Christmas Carol but with what Chris describes as “pseudo racist fake-ass acrylic sweaters”, trying to take off his obligatory Christmas jumper when an annual Christmas Eve night out starts disintegrating into recrimination and desperation.

It’s almost certainly Charles Dickens’ first drink ‘n’ drugs Christmas comedy too, but everyone needs to get out of their Victorian urchin-filled comfort zone sometimes, don’t they.

Three friends have been doing this annual Christmas Eve night out for 15 years, since Ethan (Joseph Gordon-Levitt) lost his parents in a car accident.

This year they’ve agreed it’ll be the last meet up. Chris (Anthony Mackie) is now a super-successful footballer, and Isaac (Seth Rogen) is about to become a father. But Ethan is still single, and still in a dead-end job, often involving wearing elf ears. And he’s just split up with Diana (Lizzy Caplan).

This year, Isaac’s heavily pregnant wife Betsy (Jillian Bell) sends the three men off with a special present: a box containing every drug the world has ever seen, as a thank you to Isaac for being so supportive. And just to add to it, they also visit their old drugs dealer from High school, Mr Green (Michael Shannon).

Meanwhile Ethan has spontaneously stolen three Nutracker Ball tickets, and it looks as if this could finally be the night that their dreams come true.

To be fair, it doesn’t start badly. They go to a bar, bump into friends and exes, have sex in bathrooms, go to Chris’s mom’s for a meal, and buy more drugs, with everything interspersed by Isaac’s hallucinations. But it’s getting late and they STILL haven’t got to the near-mythical Nutcracker Ball, a party they’ve been trying to track down for years.

This is a film about drunk, high people getting together, breaking up, digging down in the depths of their souls for old slights and flinging them back at the originator – before eventually realising what friendship and family are really about.

They do this over one very, very long evening (my suspicion is women would either sort it out on the first five minutes then get hammered and tell each other they love them, or string out the grudges and putdowns for a minimum of 30 years).

It really does feel like one of those dreams where you’re trying to get somewhere, but you keep being waylaid and finding yourself back at your friend’s mom’s house being fed another dinner. (That does actually happen by the way.)

I’m sure it’s partly deliberate – Isaac is so drugged up he starts seeing octopus tentacles instead of hands – but it is one of those movies where I wanted to chivvy them along all the time, get them where they we’re meant to be before they can get to where they’re meant to be.

Old and new fissures open up: Isaac and Ethan are suspicious of Chris’s huge sporting success at an age most sportspeople are slowing down. Isaac is terrified of impending fatherhood. Ethan thinks he’s a loser.

Poor Isaac feels more and more put upon as Christmas Eve unfolds, the drugs he’s imbibed take hold and he becomes convinced that he’s being held responsible for the death of Jesus. Even sitting in Midnight Mass with his wife, he sees a young baby apparently telling him to fuck off.

In another part of town Ethan, lovelorn and unsuccessful in life (“Dude, you make music that people have never heard!” Chris tells him) is getting into an altercation with two drunk Santas who, he feels, aren’t giving the Spirit of Christmas the respect it deserves.

And Chris is in pursuit of a self-styled Grinch who hates Christmas, has Hans Gruber from Die Hard as her role model and shagged the footballer in a pub toilet only to steal his weed.

They do get to their party (come on, this is a Christmas film!), though it’s not over yet for Isaac. “The Jewish guy crucified the Messiah!” is heard as Isaac accidentally impales Chris’s football star teammate to a giant star with the stem of a wineglass.

The Night Before is intermittently sparkling; and it’s hard not to feel for the three friends (especially Isaac, whose trip to church will resonate with anyone who’s been out on Christmas Eve and then thought “Midnight Mass! That’s a good idea!” before being sick in the aisle).

It often whirls around like a multicoloured snowstorm, until its ending which takes an age to unfold. It is sometimes a bit of an endurance test though, and I get enough of that during my own Christmas.

The dark side of the festive season is not that dark. The Grinch – or is she a message from the Ghost of Christmas Something? – is naughty and funny, leading Chris a merry dance. Isaac hallucinates a strip club visit with his wife in 18 years’ time where he finds his as yet unborn daughter is one of the dancers.

It also has the best-worst product placement ever, when they rave over a super-techy phone and Red Bull within about three minutes. But then they stop, so it’s as if they want to keep the ads to one tiny bit of the film, pocket the cash, then move on and hope we’ve forgotten.

The cast includes several well-known faces popping in, playing other characters or themselves (Miley Cyrus appears as Miley Cyrus and is terrific).

Overall The Night Before is daft fun. And there are enough really stupidly funny jokes, particularly about serious worries (cheating at sports, terror at impending fatherhood, fear of commitment) to keep you watching to the end. At which point you can go “WTF?” and crack open the eggnog. (No I don’t know what eggnog is either.)

the night before is on vod, blu-ray and dvd from amazon.com

the night before is on vod, blu-ray and dvd from amazon uk

Watch the trailer for The Night Before: