You are here: Home / Film Reviews / The Incredibles 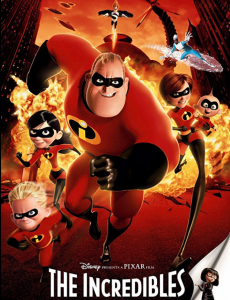 “Leave the saving of the world to the men? I don’t think so. I don’t think so…” says Elastigirl (Holly Hunter), and The Incredibles movies (the sequel, made 14 years on but set immediately after the end of this movie, is out now) always manage to turn expected Superheroics on its head.

Above all, The Incredibles is about family, and working as a team to defeat evil. Not as easy as it sounds, when the parents have spent years warning their children to suppress their superpowers and now find they need all the help they can get.

Mr Incredible (Craig T Nelson), Elastigirl and other superheroes around the world have been saving lots of people, but they’ve also been making a whole lot of mess. Sure, the world needs superheroes. Well for a while anyway, until they overreach themselves and start being sued by the people they’ve rescued. Some of whom it turned out didn’t want to be rescued at all.

As the lawsuit bandwagon rumbles on, eventually governments round the world make superheroes illegal. They’re given an amnesty from prosecution for previous actions if they promise to hang up their lycra all-in-ones for good, and are then relocated by the Superhero Relocation Program.

Mr Incredible and Elastigirl become Bob and Helen Parr. 15 years later and he’s working in insurance while she is at home raising their three children, teenage Violet, little Dash and baby Jack-Jack.

“The world just wants us to fit in” Helen tells young Dash, and this is a parable for children about conformity and hiding one’s differences because of other people’s ungrounded fears.

Work for Bob is a depressing Groundhog Day of lying to claimants that their insurance policies don’t cover their claims, then secretly giving them the information to counter this and get the payout they are due.

His manager is the epitome of a society that forces conformity: “a company is like an enormous clock it only works if all the little cogs work together” he says (though that’s not always a bad thing, as evidenced by this movie where every element works in harmony to produce something that’s witty, entertaining, fast-paced and rather emotional).

Bob still occasionally superheroes with friend Lucius Best, also known as Frozone (Samuel L Jackson); but each time it happens Rick Dicker, who runs the relocation program, is called in to wipe people’s memories and clean up the rubble.

While Helen is somehow coping at home, poor Bob starts to resemble a 1980s British trade union leader worn down by several years of a Thatcher government.

Luckily an opportunity arises in the form of Mirage, a glamorous contact from a top secret project who sends him a self-destructing message on what looks ike an iPad, though to be honest I can’t remember if we had iPads back in 2004. It’s definitely post-papyrus / carved rock / Victorian wax-sealed note delivered by a tattered urchin in snowy London though.

They want Mr Invincible to help them fight the Omnidroid, a metal ball with four tentacle-like legs that is running riot on a tropical island.

Bob is keen, though after years without having to run around rescuing people, he’s now got a Dad Bod, and even getting into the tube to fire him across the island is tricky.

The jungle-covered island is a beautiful creation – cool blue skies, hot misty interiors, and luscious greenery. The Omnidroid is a fearsome foe though, and getting more powerful. It can it run, roll and climb, flinging Mr Incredible all over the place; but it’s also learning about him and the way he fights, to make future Omnidroid versions even more powerful.

Mr Incredible defeats the Omnidroid, and heads home to await his next mission from Mirage. Doing what he does best has also given him a whole new lease of life, and a purpose, so soon he’s getting back into shape, lifting trains.

But an android needs a creator, and it turns out to be someone Bob knows: little Buddy, who we saw as a Mr Incredible superfan at the start of the movie. When Mr Incredible is summoned back to the island he discovers that Buddy, now bearing the self-awarded superhero name Syndrome, is going to send the Omnidroid to Metroville, defeat it himself, and bask in the glory. (God, so many villains are doing it because of some perceived childhood slight, aren’t they.)

Syndrome’s evil plan is actually rather egalitarian, eventually anyway. After defeating the Omnidroid he’s going to sell his inventions to the public so everyone can be a superhero. Because when everyone is super, it won’t have any cachet. Yes, he’s planning on democratising superhero-dom. Which doesn’t sound like a bad idea to be honest, though human nature being what it is soon you’d have the new, paid-up superheroes claiming their success is down to their innate goodness and not superhero privilege, with the have-nots blamed for their own misfortune.

Fortunately Elastigirl is on the case, and, with her two stowaway older children, flies in to help. This is a family affair and as Mr and Mrs reunite in the facility (there’s a terrific scene where she manages to get stretchy bits of herself stuck in several different automatic doors, metres apart, like when I try to trap a spider under a glass and misjudge it so various legs are sticking out) the kids are fighting off flying saucer guards outside.

This is a clever, very funny film, without the laziness and ironic shorthand that many of these types of films seem to have now (and which are increasingly the animated equivalent of observational comedy about why socks go missing in the wash, or toast falls butter side down).

The final showdown takes place back in Metroville. But with four members of the same superhero family to tackle Omnidroid and Buddy, and Frozone back on the scene (once he finds where his wife Honey has put his superhero suit), it would be incredible if The Incredibles didn’t actually win.