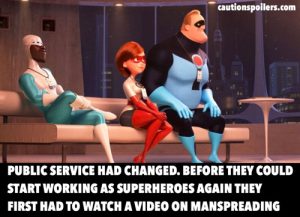 “Done properly, parenting is a heroic act” intones Edna Mode, maker and mender of superhero apparel, and when Edna speaks we should all listen.

Incredibles 2 is a film that holds a mirror up to how we live now. There’s the obvious (very obvious – at one point Elastigirl says “”Independence from screen slavery!” as a kind of rallying cry) social ill of our time with its super-villain, the brilliantly-named Screenslaver.

But it’s also a critique on parenthood. Not just Bob Parr (Mr Incredible) staying at home to look after their three children while his wife Helen (Holly Hunter), also known as Elastigirl, is off doing superhero stuff; even though unusually he deals with the fallout of his parenting rather than reverting to Default Parent mode and calling Helen home.

But for its accurate portrayal of living with a growing baby, who changes like lightning just as they’ve got used to its previous developments. Little Jack-Jack is starting to show evidence of his superpowers – lots of superpowers.

The family’s reactions are the same as any of us when faced with a baby, whether our first, second or third (while they are all different, it’s also amazing how easily you forget that your first one decided to show off its new rolling skills just after you put it on the corner of the bed, until your second does exactly the same thing).

Most babies are Jack-Jack to a degree – new skills they can’t control, dangers they can suddenly access but don’t understand; grinning madly at us as we rush with arms outstretched, seeing ourselves in slow-motion from above. They also love cookies, and if they don’t get their own way they turn into screaming monsters.

And in his sense of shock and awe at this fizzbomb baby, Frozone is not unlike many childless friends when they spend more than a couple of minutes with a previously cute, and previously immobile, baby.

Writer-director Brad Bird has included some brutal burns too, and not just when Jack–Jack (Eli Fucile) explodes into flames: politicians are nervous about people doing good for its own sake, says Rick Dicker, head of the now-closing Super Relocation Program.

But mainly its message is about screentime, and how little we actually interact with our world; watching with glazed eyes, hypnotised by what we are seeing.

Screenslaver also wants his moment of fame and like the best/worst villains gives an initially interesting and then rather yawn-inducingly earnest speech about his motivations, a bit like being lectured on Twitter by someone who’s just read the back of the paperback version of something by George Orwell.

Still, it’s a useful insight for Mr and Mrs Parr about what’s in store for them when their kids come back from their first term at university.

After the events of the first film, made 14 years ago, superheroes are still illegal (this sequel actually starts just moments after the first one finishes). They’ve been vilified, mostly but not always unjustly: when Mr Incredible (Craig T Nelson) and Elastigirl are shown the cost-benefit analysis of their respective superheroic activities, she certainly comes off best.

But brother and sister business owners Winston (Bob Odenkirk) and Evelyn (Katherine Keener) are on a mission – to bring them out of the shadows. They’ve rounded up numerous B-list superheroes, desperate to be legal again. But it’s Elastigirl who holds the key to initially changing perceptions.

And Winston knows that with society as it is today, it’s all about perception; the public opinion-altering headlines about the chaos and destruction that accompanied superheroes and their work, while no one ever saw them actually in action.

Winston wants to change this; so Elastigirl is sent out to await a crime, with a suitcam to record her actions. And it works beautifully, when she stops a runaway train whose driver has been hypnotised by looking at a screen.

Her interviews afterwards show she’s the superhero, and the chatshow guest, we need right now – for a world bored with ageing white men boasting about their exploits.

Back at home, Bob is both jealous of Helen’s success and exhausted by 24/7 parenting. Dash (Huck Milner) is befuddled by his homework but not as befuddled as his dad deciphering modern maths.

And poor Violet (Sarah Vowell) – teenage years are hard enough without the boy you like forgetting to turn up for your date as his memory has been erased after seeing you in your superhero mask.

Meanwhile Jack-Jack is defying the laws of physics, and having a scrap with a raccoon over a chicken leg in the trash.

Out in the world, Elastigirl is closing in on Screenslaver, setting us up for a final showdown aboard a hovercraft – but it’s a battle she can’t hope to win without her family’s help. Yes even from (in fact mostly from) Jack-Jack.

They all have something to contribute. Violet can create forcefields. She’s precocious too, making herself invisible, something only bestowed on most women once they hit 45.

Dash is fast, and the baby is a self-immolating, self-cloning, x-ray visioned, laser-eyed, dimension-hopper who can walk through walls.

I loved some of the characterisation; Dicker is like a down-at-heel private eye, gloriously world-weary after several years protecting in-the-shadows superheroes from their own mistakes. He seems even more shrunken when he hears the department tasked with protecting them is closing.

Violet is a perfectly conflicted teen and as for the baby, it made me want to have another as long as I didn’t have to look after it. And then there’s the unruffled Edna, an oasis of stern calm among the hyperactive mayhem.

The action is fast-paced and witty; the script is clever, and the story has twists and turns that children can still follow. Its screentime allegory is obvious but appropriate considering this is a children’s film, and lots of them will have had to be enticed away from their tiny screens to watch this on a big one (when I say “lots of”, I mean my two).

But best of all is its depiction of parenthood. Bird is honest and unflinching in his refusal to allow Bob to hand over responsibility, as he finds his own family solutions to family issues.