You are here: Home / Film Reviews / The Hatred 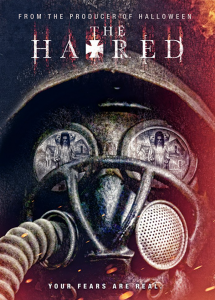 It’s 1968, and German farmer Samuel (a suitably sinister Andrew Divoff) is living with his wife and daughter on a fruit farm in the US. He’s certainly creepy, and his clashes with his teenage daughter Alice (Darby Walker) are worse than your average father-daughter arguments even given the period it’s set.

One day a package arrives, containing a photo of a young Samuel with Hitler, a strange relic and a letter. The relic is a chunky iron cross, which Samuel quickly cements into the cellar wall, though its presence is immediately felt; it’s a vessel of hatred, and simply being near it makes people do terrible things.

Soon his daughter is dead, drowning in a particularly horrifying scene in a water trough in the barn. Then her mother, still unaware of Alice’s death, kills Samuel.

These early scenes with Samuel, his wife and daughter are the best in a film that then goes downhill faster than a rolling head that’s just been lopped off someone’s shoulders by a maniacal madman.

It’s a shame really, as Divoff sets us up well as the quietly malevolent Samuel, who is much more frightening alive than dead. He reeks of menace.

The house has been bought by her old college professor, who is away, though Regan will be looking after their daughter Irene (Shae Smolik) for the night. (What is it with giving young girls in films old lady names that were totally excluded from the old lady name revival?)

The young women seem at first to be the usual horror victims – leggy, wavy-haired, a bit sneery about the boring town they’ve ended up in for the weekend. But as the story unfolds the script at least tries to subvert the genre’s tropes a little. One of the women turns out to be a history buff who is genuinely fascinated by the German artefacts they discover in the basement. Earlier she’s in raptures at a mask they find in the living room: “oh my god this looks like an 11th century Viking death mask. I’m in heaven!” she says, little knowing she soon will be.

As the women settle in, Irene is brought round by a friend who looks like she’s escaped from Witness, though her over-acting when standing on the doorstep is one of the most fun parts of the film. Rushing off as soon as she can, she’s too scared to step over the threshold but happy for poor little Irene to, like me when I drop my children off at a soft play party and then run like the wind.

The house does look beautiful now, with Irene’s room bright and colourful. One bedroom, though, has been left as it was in 1968, which means it looks exactly like the house I grew up in during the 1980s right down to the wardrobe full of unfashionable dresses.

The night brings with it a thunderstorm of epic proportions. They play hide and seek with Irene. Strange things start to happen. Figures are seen in the background, strange smells emanate from the bathroom that for once can’t be blamed on my 6 year old. Irene seems to be tuned in to some kind of horror, and sounds alternately terrified and terrifying.

The horrors pile up faster than the bodies: a creepily rotten figure creeps under the blankets, strange voices and weird messages pop up on mobile phones. For some reason an old doll’s head appears on the floor. Even the pizza delivery boy looks like a murderer.

There doesn’t seem any rhyme or reason to the parade of horrors unleashed. Eventually it turns out that poor Alice is to blame for much of it, and Samuel for the rest, though I’m not sure which bits. It’s confused, and confusing.

Plot lines are begun then left hanging, but not in a mysterious way, and characters are often wasted. Alice’s mother disappears after killing Samuel and never comes back. Regan’s dying grandmother, far away, seems to tune into something but again she’s then just forgotten. The actual cross doesn’t appear again, although we get plenty of shots of the piece of wall behind which it’s hidden.

There are a few neat touches, including a scene involving Irene. The original 60s setting is well done and interesting. The end is frenetic before slowing right down in the last couple of scenes. Overall the movie lacks tension and feels stretched out for too long with a lot of half-completed ideas put in to fill the time.

Some of the acting is poor though Smolik turns in a creditable performance. In general, the interesting scenes are spread too thin while the scare tactics are laid on too thick.

Apparently The Hatred is based on a short, which is something I’d be interested to see. But really, if you want to watch a film about evil dead Nazis you’d be better off renting Dead Snow, the Norwegian horror comedy about Third Reich zombies.

The Hatred is available on DVD and VOD from Amazon UK

Watch the trailer for The Hatred: