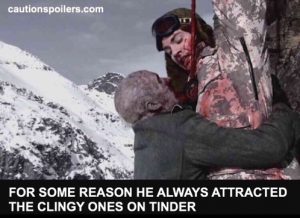 “If you have your intestines in your hands, what do you do then?” and this sadly un-rhetorical question, posed by a Menacing Local to the kids-in-the-isolated-cabin, haunted me until about two-thirds of the way through Norwegian Nazi zombie mash up Dead Snow when it was overtaken by this thought: “if you are hanging off a cliff holding onto a Nazi zombie’s unravelling intestines, what do you do then?”

Dead Snow – a horror film obsessed with intestines, all of which look like strings of Tesco sausages – is set in the frozen mountains of Norway.

And it’s a played-straight, yuck-filled delight, gleefully throwing around horror tropes with great abandon without discarding decent filmmaking in the process.

It’s probably not one to watch while nursing a hangover and contemplating a Full English, but that – apart from not going to an isolated cabin with your attractive twenty-something friends – is the only warning I’m going to give you.

A group of young people (Hanna, Liv, Chris, Martin, Roy, Vegard, and Erland), all medical students, are travelling in convoy to a cabin for a break, where they’ll meet Sara, overland skier and super-sporty girlfriend of Vegard.

Once ensconced in the house they bond in that time honoured way: beer and Twister. But soon they are disturbed by a menacing-looking local (why don’t normal-looking people give warnings? Oh yes they are AT HOME, INDOORS, STAYING SAFE).

Menacing Local is here to explain the history of the locality, and it’s not good. They are near a harbour which was used by the Nazis in World War Two as a base from which to stop trade convoys between Russia and England. The Nazi Einsatz group, led by evil Nazi Colonel Herzog, mistreated and tortured the locals before stealing gold and silver as the war was ending.

3000 locals rebelled and, finding any weapons they could, attacked the 300 Einsatz soldiers. The survivors, including Herzog, fled into the mountains, where they disappeared, presumably frozen to death.

There is, claims Menacing Local, “an evil one does not want to waken”, and parents insert your own joke here about your kids as you try to tiptoe out of their bedrooms at 11pm without them sitting bolt upright, staring-eyed and demanding to watch Peppa Pig.

Like many parents Menacing Local is of the ‘do as I say, not as I do’ variety: despite his own warning, he then goes off to camp in a tiny tent in an area apparently awash with Nazi zombies.

Soon the hills are alive with the sound of grunting and screaming and intestines unravelling, as the students are picked off one by one and ever more Nazi zombies appear out of the snow.

Though it’s played straight, there’s an understanding about, and a huge fondness for, horror films.

As usual the women are much better looking than the men, though I’ll tell you now it’s too cold in Norway for gratuitous nudity unless you include someone’s actual kidney. And as usual they find something the monsters want and decide to keep it.

It was also refreshing to see proper undead zombies again, rather than victims of some unspecified virus that’s just made people really angry. Sometimes the traditional monsters are the best.

And because these are Nazi soldier zombies, that means no attempt to instil sympathy in us for the zombies, usually as part of some “but who are really the monsters here?” chin scratching. (Interestingly the director of Dead Snow, Tommy Wirkola, has said he wanted creatures no one would sympathise with, and which are Nazis first and zombies second.)

Dead Snow boasts a classic if not very complex plot: a group of young people head off for a weekend in an isolated cabin, flirt, have sex, drink beer, play Twister and die.

It is, though, a blast from start to finish and has some particularly nice touches. It also makes a change to just enjoy the undead rising, without having to work out whether this is a comment on our own rampant consumerism (I’m the first to admit that this is because I don’t want my own rampant consumerism highlighted, though I should tell you now this review is brought to you by Waitrose’s ‘free coffee for card holders’ benefit.)

Dead Snow is a terrific example of a horror film that knows what its limits are within the genre, and doesn’t try to be too knowing. It’s silly, bloody and derivative, and also damn good fun. The zombies are rather frightening, more so for being Nazis than for being zombies.

As someone who doesn’t really like gore I was still able to appreciate one character’s face being literally torn in half off their skull, followed by a large internal organ plopping onto the floor. And that’s not the worst of it. The final showdown between axe- and machine gun-wielding humans and Nazi zombies is very messy and yet somehow also quite therapeutic.