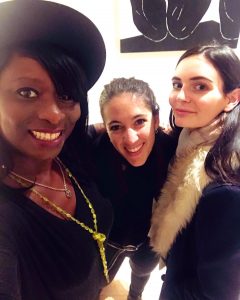 Curated again by director, writer and producer Rita Osei, the event, held at London venue The Wing, showcased some of the best in short filmmaking from women directors over the past few years.

Rita created the 225 Film Club in 2018 to promote female excellence in film direction: showcasing current and past work by female filmmakers, and raising money to support women in film.

Guests at the private event included founder of The British Blacklist Akua Gyamfi, writer/director Katerina Philippou-Curtis, founder of Primetime Network Victoria Emslie, and over 60 members of The Wing.

Ten films were shown with eight of the directors attending – who had the opportunity to speed date with producers Kate Baxter, Jules Hussey, Molly Rees and Julia Horcajo, and Roxy Holman and Chiara Ventura. 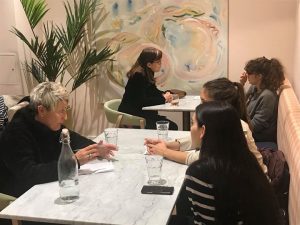 Check out my reviews below, and if you get a chance to watch any of these, please do!

Funny and sad, witty and shocking, honest and unyielding, the ten shorts take us from dusty dystopian futures to relationship dramas which are frightening precisely because they feel too near.

How Can I Forget 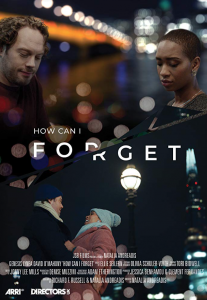 One of my favourites, and previewing at the event, is a bittersweet romance that’s joyous in the now but with an air of sadness about the future.

Connie (Genesis Lynea) and Joe (David O’Mahony) meet when they’re dragged along on a date between their respective best friends (along with exhortations not to be weird).

The two quickly discover they share an unusual gift, their mutual understanding of its pleasures and burdens allowing them to shed their usual guardedness.

Cleverly and naturally moving into unexpected territory, this is the one time seeing a couple on screen breaking into a song and dance routine and both knowing all the moves does not require suspension of disbelief.

It’s an unusual and unexpected short, and also witty – as two people, jaded about life and unable to fit into society’s boxes, find each other, even if it’s not forever.

Actress and choreographer Lynea is a standout.
Back to top 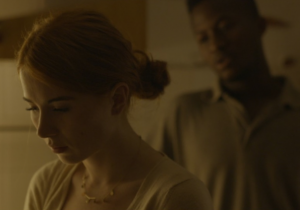 A metaphor about pain and the snuffed-out spark in long-term relationships, and also a film where it’s easy to put one’s own spin on what it means. Ameira (Maddy McWilliam, in a role that pulsates with her loneliness) lives with her boyfriend, but it’s a relationship struggling with ever-increasing emotional distance.

She has some unspecified pain, and goes for an exploratory operation which he doesn’t know about.

While under the anaesthetic she has a brutal vision about the investigations on her body. 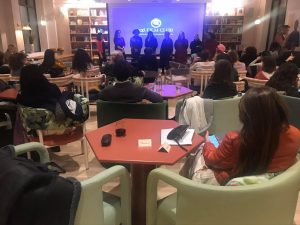 Some of the films’ directors at the event

I wasn’t sure if the pain she’s in is the physical manifestation of the problems in her relationship, or if it’s real but her broken relationship with her boyfriend means she can’t share it, or that she is struggling with body image and is in a downward spiral of beauty treatments, self-improvements and cosmetic surgery (her nurse jokes that if they find out the source of her pain they’ll be out of a job).

It’s a touching but sad film about loneliness and the chasms that can erode between you and someone you’re sleeping next to. 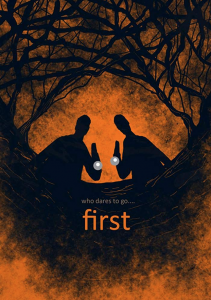 As one of four brothers and sisters, I loved Darcia Martin’s mini horror film.

It’s a bleakly funny exploration of sibling rivalry and how it can go badly wrong, even if (because?) you know them so well.

The relationship between soon-to-be-married Neil (Jack Ashton) and his older sister Charlie (Meghan Treadway) will be familiar to many.

It’s a combination of deep love, ownership and incredible recall of childhood slights (sometimes I think my childhood grudges are what keeps me going, and I like my siblings).

And there are more recent bumps too, bubbling under, waiting to burst out some time in the future. 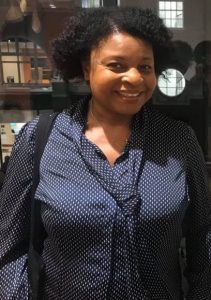 Their pre-wedding hike, just the two of them, bristles and crackles with affection and resentment; the decades of history they have together feels entirely believable.

But it gets dark, the map blows into a hole in the ground (an old mine shaft maybe?) and Charlie goes down to look for it…
Back to top

An excellent dystopian tale about freedom and race, set in a desert-like post apocalyptic Britain (a welcome change film-wise, as usually we just get zombies). 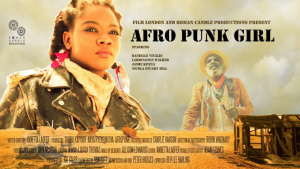 And it is truly British – the government is in love with surveillance technology, and offers Yorkshire pudding powder as a Christmas treat.

The UK is a wasteland, dotted with small relief centres that try to serve a violent population that doesn’t like outsiders.

Lil White, 22, a young Black British woman, cycles through the wilderness with her few possessions on a giant trike, head down and trying to avoid trouble. 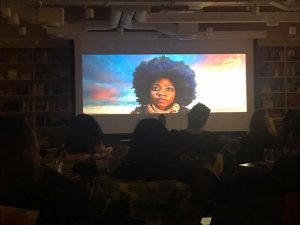 Then she bumps into Mr Dandy, an elderly Black man in a once-flamboyant tattered peach suit and a boater hat. He’s not on any government system, and away from that cataloging of humanity has retained the two things that make us human: his compassion and his identity.

Mr Dandy’s voice is damaged and he sounds like a Dalek; everyone else sounds normal but has been emotionally battered beyond belief, the normal rules of society no longer applying.

The colours are gorgeous above the brutal wastelands, with skies of orange, blue and grey, and multicoloured fish like rainbow mermaids from a children’s book. This is a nerve-wracking film with terrific performances from Danielle Vitalis as Lil and Larrington Walker as Mr Dandy, and a hopeful, confident ending.

Made to mark International Women’s Day in 2015, this is a split screen documentary with women thanking other women who have helped them: mothers to their daughters, patients to nurses, children to adults. 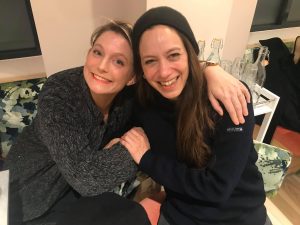 Some are recounting incredibly traumatic experiences while others have found practical or emotional support in everyday situations.

The reactions are fascinating: not just the expected delight and gratitude at the recognition, but also showing how hard women sometimes find it to accept compliments for their kindness.

At the end of each piece to camera, one of the women remains on screen while the other is gone, the camera lingering on feelings and reactions.

It’s a warm-hearted and sometimes poignant exploration of both the minutiae of women’s lives and the shocking events that come out of the blue, and the other women who have helped them. 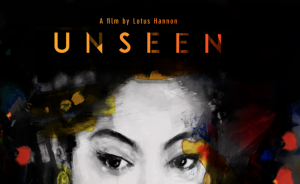 Clever and unsparing, as Lien, a young woman desperate to go to art college, utilises the invisibility that comes from the sexism, racism and classism she faces in her everyday life.

Brought up in Manchester, she works in her mum’s nail salon, topping up the takings box with the money she makes from sex work.

Sam (Tim Delap), the white married punter, sees their liaisons as part-relationship and part-ownership – and it’s easy for Lien to maximise her earnings by playing into familiar racist tropes of white saviours and young, submissive Asian women. 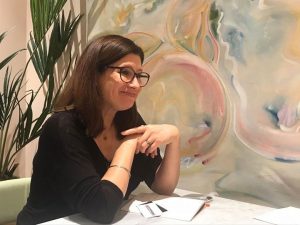 Jan Le is a nuanced and knowing Lien, using Sam’s fetishisation of her to her advantage but thoroughly angry and depressed by how boxed in she is by society.

Her chance at visibility on her terms comes when she decides to help Omar (Waleed Elgadi), who is in the UK illegally but just wants to reunite with his missing boyfriend.

This is a timely film about anxiety and panic attacks, and their relentless and merciless effects. 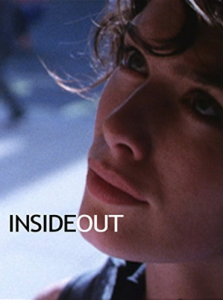 Aislinn Sands is Out, a confident, capable and attractive business woman, the kind who gives me imposter syndrome if I ever come across them in a work environment.

But no one is immune to the threat of anxiety, and on her way to an important meeting she has a panic attack on one of London’s bridges that leaves her breathless and terrified.

It comes from nowhere, and takes the form of Inside (Tanya Khabarova) a woman who starts off literally attached to Out.

They separate, but she’s always in the background, a burden even when Inside is nowhere to be seen.

That collision between internal terror and a feeling of exposure, and the inescapable and random nature of the attacks, is well done.

I loved this Canada-set drama, which was previewing at the 225 Film Club event. Mixing a dystopian future with real-life Canadian history, Sundown also raised lots of questions – of all the films, I most wanted this and Afro Punk Girl to be worked into full length features. 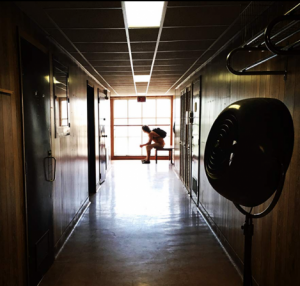 A scene from Sundown

Gabriel Penfold (Brendan Flynn, who also co-wrote) is being discharged from the Canadian armed forces, after a deed of bravery. He needs to go somewhere, though he’s reluctant to explore his origins with the forceful Major Kusiak (Shelagh McLeod).

The horrors aren’t limited to Canada, offering a chance for some bleak wit – at one point he walks past a rusted sign propped up on the ground, proudly announcing the Archipelago of Britain.

Sundown is about belonging in a tumultuous world, and finding out where we are from, something that becomes more important the more under attack or rootless we feel (Gabriel is Métis though he’s realistic about how involved he’s been in that society).

The film takes us into an idea of a horrifying future where the need to know one’s past becomes even stronger, even if it raises issues and questions that societies might not want to address.
Back to top 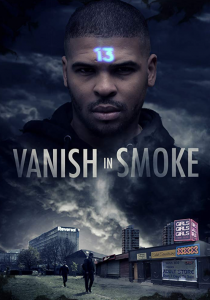 A clever take on modern society and (presumably) social media, where you can be whoever you want to be but other people might not be what they seem.

Grooming and coercion mix with questions of identity and how easily we can remake ourselves, in a future world where people can have their bodies and / or their minds de-aged.

Cidji’s mind is now 13 again, though he still looks like an adult.

And it’s really not as fun as he thought it would be as he’d forgotten that being a teenager is as tumultuous as it is joyful and exciting.

That changes when Cidji (an open Kola Bokinni) meets another middle-aged 13 year old who seems to feel just like him. 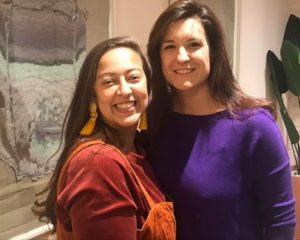 Vanish In Smoke writer/director Amal Al Agroobi, with How Can I Forget director/ co-writer Natalia Andreadis

But there’s a sinister undercurrent lurking – is new friend Ralph (Orion Lee) to be trusted?

This is an effective and shiver-inducing short that will stay with you.
Back to top

A short drama about hiding, with Maria (Ada Condeescu), who has moved to the UK for a better life with her young daughter and to escape her ex, still forced to conceal her true circumstances. 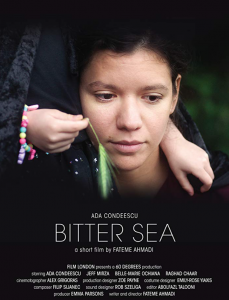 She works in a fast food shop and lives in a flat owned by her boss, and has to leave her daughter Tatiana (an impressive Belle-Marie Ochiana) at home in the flat while she works.

Tatiana has to hide under beds and in cupboards when the landlord comes round, and Maria is increasingly tempted by a friend’s advice to give Tatiana sleeping pills while she is working.

Bitter Sea (which was nominated for a BIFA award for Best British Short last year) is a more hopeful film than it sounds, but also a cogent commentary of how life is for someone with no support, making a wrong choice that could have terrible repercussions.

All profits from the 225 Film Club event were donated to the non-profit organisation Raising Films: “Raising Films calls on the film and TV industries to serve its parent and carer members better, to increase their number, and to aspire to the best possible practice, to make it possible for all voices to be heard.“

Rita Osei directed and produced the family film Bliss!, about a teenage girl, Tasha, who travels from her home in South Shieldss to Scandinavia, in an attempt to find the father she’s never met. Check out my 4-star review of Bliss! and read my interview with Rita.
Back to top