You are here: Home / Film Reviews / Tales From The Lodge 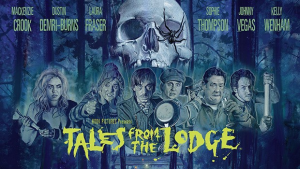 Arranging reunion weekends with ex-university housemates is a bit like trying to get tickets to Hamilton.

At 30, you fall at the first organising hurdle when it turns out no one’s free on the same weekend for the next two years.

By 40, you arrange it anyway because you know those two years will go in a flash – so when it comes round you’re still completely disorganised and reduced to WhatsApping each other from local Spars trying to find organic kale, while someone else gets a youthful thrill buying Rizla papers from the local garage for the first time in 15 years.

The university friends in anthology horror comedy Tales From The Lodge have forgotten the weed, unfortunately, as well as – the horror, the horror! – the olive oil, though unfortunately one of them, group heartthrob Paul (Dustin Demri-Burns), has remembered to bring along his current girlfriend, the young and beautiful Miki (Kelly Wenham).

Annoying at the best of times (the last thing I wanted reminding of at 40 was how I looked at 25), Miki’s presence is even more unwanted as the friends have got together to remember their friend Jonesy, who died by suicide in the lake opposite the lodge three years previously. He’s a looming presence, though there’s only a line or two of dialogue to describe him.

Joe (Mackenzie Crook) and Martha (Laura Fraser) are coming to terms with his heart condition and the uncertainty now he’s on the waiting list for a transplant. Russell (Johnny Vegas) and Emma (Sophie Thompson) are just relieved to be away from their young children for a whole night.

They’ve got his ashes to scatter in the lake (cue a gust of wind blowing the ashes right back at them) and are going to fill the other hours catching up, getting drunk, and trying not to eat a giant quiche one of them brought with them (that quiche gets more characterisation than Jonesy).

Along the way everyone tells a spine-tingling story (the actor playing the key character directs “their” segment), though it’s not made clear whether they’re continuing a tradition, or just randomly trying to out-creep each other. The stories interrupt the flow of their time at the cottage; while it’s jarring (the scary stories are so entertaining that dropping back into the lodge is sometimes unwelcome), they provide a link to each narrator’s own relationship experiences.

I loved Martha’s tale about Amanda, a woman who has emotionally checked out of her dull marriage, a much greater threat than if both parties have sunk into enervated boredom. Nicola Stephenson has great fun as Amanda, who rediscovers her mojo after going on a ghost walk and flirting with the earnest American leading them. It’s a bouncy (in every sense), witty segment – even the couples photos on the wall show Amanda looking like she’s been watching paint dry for the duration of their marriage, while her husband Dean goes for a look best called cheery desperation.

Russell’s is a cartoon strip zombie flick starring “Keifer Sutherland – or similar”, with Vegas sporting a blond Keifer wig as he befriends the teen who saves him. It’s a very British, and very Vegas, zombie apocalypse.

Paul’s story, about his kidnapped Mercedes, shows exactly where his priorities lie. Joe’s is a bloody (good) nightmare as he lies caged on a hospital bed, highlighting all his terrors about his health, his body and his relationship. It reminded me of scenes from Ghost Stories and was the only element in the film that I found frightening.

Poor Emma is too busy and exhausted to come up with a proper, filmed story, and just gets to vomit up her feelings about childbirth. I suppose it wouldn’t be a horror film without some discussion about the terrors of motherhood.

Meanwhile Miki offers cupcake decorating, and tries to fit in while asking questions that are often a little too probing. Martha hates her from the start, pushing back instantly. Emma placates, until she’s pushed too far.

It’s not just the film-within-a-film interludes that jar. There’s a downstairs bedroom with no door, opening onto the living room, where Paul and Miki make out without the others apparently noticing. Ir maybe it’s a comment on British politeness? It reminded me of a hotel chambermaid job I had years ago, where one of the bathrooms opened into the bedroom with those short swinging saloon doors you see in Westerns, though that’s probably a tweet for another day.

Tales From The Lodge is only 90 minutes long, and it’s entertaining enough that it doesn’t matter that we’re an hour in before the idea that they’re being watched by a murderer becomes apparent. Soon after the hints appear, a deluge rather than a drizzle. You’ll know at that point who is trying to kill whom, though there’s a twist on that.

And that final twist feels old-fashioned. Because the film never properly explores the friends’ relationships, it looks mean-spirited. With more characterisation and clearer motivation, it would have been the personal story of one individual. As it is, it plays as an unpleasant trope.

I didn’t care who was murdered, though I approved Emma’s wails when faced with death that she shouldn’t be killed as she’s a mum. (That she’s not the killer is not a spoiler, as with three small children there’s no way she could plan and execute mass murder. In a moment of frustration she might impale someone on a Peter Rabbit fork, but that’s all.)

I liked the lodge itself, which perfectly encapsulates countryside holiday homes that have been in families for decades and rarely get cleaned. It’s a bit grim, looks damp and has spiders (there’s a clever if brief spider-killing incident told from the doomed arachnid’s point of view).

In fact it resembles most of the cottages my family holidayed in between 1970 and 1985, and any 21stcentury cottage renters complaining that the croissants aren’t buttery enough or the pillows suitably fluffy don’t know they’re born.

Writer-director Abigail Blackmore has a real flair for witty, natural dialogue, further helped by the experienced cast’s comic timing. They do feel like a group of friends, their scratchiness revealing how friendships in a big group aren’t equal, and shouldn’t always be allowed to go the distance. In any group some people are lovely, some are fine until they relationship is tested, some are damaged, and some are dreadful. (Blackmore won the Genre Rising Star Award at this year’s FrightFest.)

The performances are good, particularly Vegas and Thompson. Or maybe it’s just because their differing reactions to parenthood rang true for me.

Watch the Tales From The Lodge trailer: