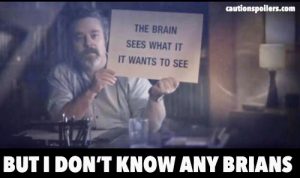 “Abandon hope, all ye who enter here” is the inscription at the entrance to hell, according to Dante’s Divine Comedy.

But while no one actually wants to go to hell – not even me, when it still looks as if that’s where Keanu is headed in Constantine – for many, it’s actually finding out that there is no afterlife on any plane that is the real pinnacle of hopelessness.

I don’t believe in ghosts, though I’d never say that to one. Who wants to piss off a spectre who may have links to demons, vampires, and the spirits of walled-up chain-rattling medieval ladies?

But Ghost Stories still manages to show the comfort that belief in the afterlife can bring. Steph, in the audience of a medium being debunked by psychic investigator Philip, seems more upset at Philip for outing the fraudulent medium than she is hearing a clearly fake message from her dead child.

Similarly, one haunting victim returns to the Church after his ghostly encounter, and his vicar (Kobna Holdbrook-Smith) speaks movingly of signs that bring people back to God.

Philip was previously Cameron’s protégée, and you can imagine them – two self-identified, clear-thinking outsiders – bolstering each other’s anti-belief system. Every alleged supernatural incident can be put down to “the brain sees what it wants to see…”, a perfect catch-all that shuts down gullible victims.

Goodman reminds me of David Brent, not just his greying hair and beard but his looming self-righteousness and dismissive self-belief, with a side order of bumptiousness. For both Wernham Hogg’s finest, and Philip Goodman, it’s a protective carapace that looks solid but will shatter with one well-placed tap.

When Tony Matthews (Paul Whitehouse) meets Goodman he’s initially reticent, though he eventually shares his other sadnesses: his dead wife and hospitalised daughter.

A nightwatchman, he was care-taking one of those abandoned asylums where innocent women and girls would have become institutionalised among echoey corridors and bare rooms.

He’s on his own in the building one night, his Russian colleague elsewhere on the property. In his little room disembodied voices appear, though initially it’s comforting, these calls to late-night radio shows and occasional check-ins over a temperamental walkie-talkie.

Until lights start going on and off, footsteps run around on other floors, and the other nightwatchman confides his own uneasiness from the other building. Tension mounts; sudden jarring shocks – like mental chalk scratching down a blackboard – initially turn out to be nothing, then something.

Teenager Simon Rifkind (Alex Lawther) lives at home, with parents so creepy only his own terrifying supernatural experience in a forest could possibly have made him lock himself into his family house rather than pack up and leave.

Riven with nerves, he’s constantly reliving what he witnessed that night, but he’s also drawn to the spirit world; his bedroom walls are covered in frightening drawings from his online and book research.

His bedroom door has multiple bolts, a useless barrier against anything supernatural. No-one could help but be moved by him, exhausted by constant watchfulness. If anyone needs proof that the supernatural doesn’t exist, it’s not Philip but poor Simon. (Lawther is extraordinary; his depiction of a shredded psyche that can only manage desperate self-protection is both moving and incredibly assured.)

Mike Riddle (Martin Freeman) is a city worker, born into money, with a new-build country home, chrome and glass against windswept moors. Dressed in garish checks and a waxed jacket he strides through the heather, relating what happened to him one monstrous, snowy night as his pregnant wife lay in hospital.

And they’re all, actually, explainable, stereotypical supernatural experiences: a crumbling Victorian asylum at night, a teenager, a pregnant woman.

Ghost Stories has elements of mockumentary (in both senses of the word) and at times it’s very funny.

There’s delightful 70s-era film footage – that decade of housing estate demonic possessions and disco – where Cameron visits an elderly woman who speaks in 200 scary voices (even more than me, and I’m a mum) and whose crockery inexplicably throws itself against a wall (even more than mine, and… you’re ahead of me).

Every incident is rationalised, though he’s picked a case that isn’t very frightening, judging by the matter-of-fact daughter who has moved back in to make sure her mum is ok.

There are occasional appearances by other women but they’re mostly dead. I haven’t seen the play, but every character of note here is a man (or a boy). It would have been good if, say, Simon Rifkind had been a young woman, yet still avoiding puberty-and-periods horror or the teenage girl-created poltergeist stereotype.

Is Ghost Stories scary? The odd jump scare did have me spilling my popcorn. (Later to be found in my bra – one of life’s mysteries, along with Riddle’s rhetorical question about the last key always being the one that fits.)

But more interesting is the growing sense of menace and misery that starts to permeate everything, until each story is drenched in sadness – a perfectly tailored mix of heartbreak, grief, loneliness and despair. All-enveloping melancholy that only Goodman can walk away from.

A gloomy day in Britain can make the most ordinary places seem creepy, and in the down-at-heel caravan sites and empty pubs it’s their very ordinariness that makes what has happened so spine-tingling.

At times the film lacks pace, though the last act throws everything on its skull. It’s almost surreal, and makes the earlier hauntings and demonic possessions look mundane and, well, English.

But overall there’s a parochial feeling that makes the stories more closed-in and inescapable. Imagine Alice In Wonderland set in wet, windy modern-day Whitby just as Dracula is rising from his coffin.

This is a very clever movie, one you need to watch unaware of what’s coming, but remembering everything that’s been. Though maybe it wouldn’t matter: “the brain sees what it wants to see.”