You are here: Home / Film Reviews / Robert The Bruce 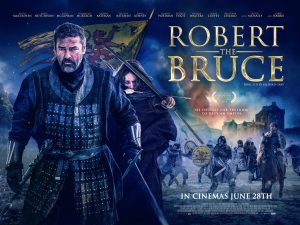 Angus Macfadyen, reprising his role as Robert the Bruce, is a lot older than when he portrayed the future Scottish king in Braveheart, though it fits this Robert; a man wiser, ground down, painfully aware of where his actions have led the country: “I truly believed that God had chosen me to be King. And then we lost. God didn’t choose me – I did”, Robert ruefully tells Morag, a widow who shelters him in her croft.

This isn’t a sequel to Braveheart, though the comparisons and assumptions are inevitable. It’s a very different type of film though: thoughtful, sober, sometimes staid, though increasingly exhilarating as it progresses – more so in its sword fights and hand-to-hand combat than many a huge battle.

I said in my review of Outlaw King that all historical films reflect the times in which they’re made, whether or not they’re meant to be overtly allegorical, and Robert the Bruce is both.

This new film, which has just premiered at the Edinburgh International Film Festival, starts after William Wallace’s death but before Bannockburn, with the Bruce bartering with rival John Comyn (Jared Harris) for the Scottish crown before a showdown in a church, a situation that rarely ends well for anyone.

He may have the crown but now he’s on the run, his life worth 50 gold pieces for anyone who turns him over to the English (who never actually appear – this is a film solidly about Scotland and its people).

No longer blessed with the arrogance of youth, he understands the shadow cast by his previous actions. “For many years he fought and for many years he lost”, Morag, whose husband died in one of these battles, tells her children, as she relates the up-and-down stories of Scotland’s then-tarnished hero. The crown, which has embodied so much, is now a circle of metal buried under a tree.

Robert even sends his supporters away, as he hides in the forests during a bleak and cold winter, unsure whether to carry on or give up.

Scotland too is ground down and tired, its people angry at those repeated battles, taking away their fathers and brothers. It’s no surprise there are plenty of people willing to hunt him for money. Even within Morag’s family there’s discord, with her 10 year old son Scot (Gabriel Bateman) unconvinced, after losing his dad, that there won’t be more death. Families, villages and clans are divided.

We’re nearly an hour in before Robert and Morag (Anna Hutchison) meet, and it does feel like a film of two halves. That first hour is slow-moving and heavy with despondency at what has led to this – but there’s an upturn in pace and interest once he meets Morag. He brings a huge additional dynamic to the croft; and as the threat to her family becomes more overt, there’s an obvious building towards some kind of bloody climax, which is no less exciting for its smaller stage.

The famous spider scene, with Robert injured by attackers and taking refuge in a cave, is only the first step in him galvanising himself to continue his campaign. Mesmerised as it spins its web, he sits hunched and shivering, finally understanding what he must do; though it’s his sanctuary with Morag immediately after that provides him with the final “why”.

The cave is near Morag’s croft, where she lives with Scot, her niece Iver (Talitha Eliana Bateman) and nephew Carney (Brandon Lessard). Their clan is aligned with the English but Morag and her family live at a distance from the village and its sheriff, her brother-in-law Brandubh (Zach McGowan) – a man whose surface love of family can only temporarily hide his brutality.

Macfadyen, who wrote his first draft of the script 13 years ago (he’s credited as co-writer with Eric Belgau), has said he wants this to galvanise Scottish people for independence. This is very much about the Scottish people – how Robert the Bruce comes to realise that he and the Crown should serve them, not the other way around. It’s a ballsy idea, to accept your mistakes while also asking people to follow you again, though one aspect Robert the Bruce shares with showier, more grandstanding epics is a sense of destiny.

It is overt in its political message, and – before it perks up considerably in the second half – sometimes borders on turgid. Still, though it is small-scale, Robert’s (and Macfadyen’s!) ambitions are anything but. It feels genuine, rather than written to a movie template. It also highlights how personal relationships can change history as much as mud-churning battles can.

For budgetary reasons Robert the Bruce was filmed mostly in Montana with only a few scenes shot in Scotland. Cinematographer John Garrett, while making the most of any available sweeping vistas, has also ensured that those lower-key, outdoor shots are genuinely beautiful. The croft, its roof heavy with thick snow, bleeds out the orange light from fires and lanterns into the semi-darkness outside. The skies at night are blue and grey.

Macfadyen may be in his 50s now but he certainly gives his all in the fighting, which is extremely vicious and very realistic. I’m also a sucker for montages and I did love Robert, as he recovered, turning into a family man (when that role also means preparing your children for war).

With Jared Harris as Comyn in those first scenes in church with Macfadyen, we’re starting off with two heavyweights battling it out, and throughout Macfadyen is very impressive as a man weighed down by knowledge of his own hubris, who still has to find a way to gather his strength and his troops. Anna Hutchison gets better and better as the story highlights her precarious position as a widow and a mother. Bateman is particularly good as the teenage Iver, a fearsome warrior in the making with her bow and arrow. (Many of the cast are not Scottish and there are some wobbly accents at times.)

Robert is more interesting now, a flawed father figure making amends with the children first. They learn that even though kings are fallible, some battles, whatever has gone before, are still worth fighting.

Watch the trailer below: