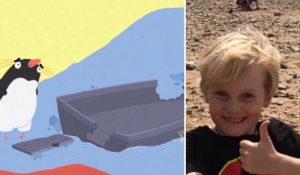 This film is five and a half minutes long. There’s a penguin who can’t swim because he has a short wing.

Nobody speaks but that doesn’t matter. There isn’t much detail in their faces. Sometimes you can only see their eyes but you can still tell how they are feeling.

He watches his friends swimming in the sea and he’s sad because he can’t do it. He knows he can’t swim so he tries to use a piece of wood from a boat, and then he paddles himself out to try and go surfing. Because his arm is short he can only go in circles unless he almost falls off into the sea.

He surfs back to shore which is really exciting but all his friends laugh at him. He’s getting bullied which is a very mean thing to do. 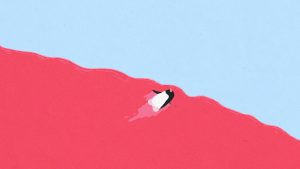 Next he makes a rocket from bits he finds in a crashed plane, the first time he tries to fly it breaks but then it works and he whizzes around the sky.  All the other penguins line up to have a go and now they think he’s really cool.

I really liked this film and I liked the colours. By the end I felt really happy for the penguin. (Mum said the penguin is a girl but I think it’s a boy.)

The Penguin Who Couldn’t Swim is showing at the London Film Festival.

Watch The Penguin Who Couldn’t Swim on the BFI Player site.