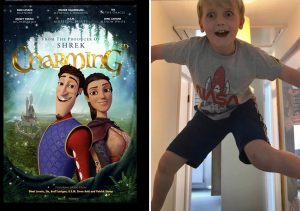 At the end of Charming they have a true love kiss. Ugh. Luckily it’s not in real life.

I didn’t want to watch Charming as I thought it would be boring but I liked it.

Prince Charming (Wilmer Valderrama) has a curse on him from Nemeny Neverwish (Nia Vardalos) so women fall in love with him when they see him. He has to break the curse before the end of his birthday and marry his true love.

But he is already engaged to Cinderella (Ashley Tisdale) and Sleeping Beauty (G.E.M.) and Snow White (Avril Lavigne).

The only woman who doesn’t fall in love with him when she sees him is Lenore (Demi Lovato). She likes stealing money and jewels.

In a baker’s shop Lenore steals all the jewels from the three princesses when they are telling her how they all met Prince Charming. They don’t know they all have the same boyfriend then they find out which is funny and I think the princesses are not going to be friends now.

The cakes in the bakery shop look looked really tasty and like they’re real.

Lenore is put in jail but then she’s paid lots of money to help Prince Charming Run The Gauntlet but he doesn’t know and thinks she is a friend. She has a fake moustache and he thinks she is a boy called Lenny.

Wow Lenny makes so much money from helping Prince Charming, at the end she has big piles of gold in her house.

When the prince and Lenny are on his quest they go through a forest, a vine wraps itself round his neck and he bites through it which is really cool.

I also liked it when they jump across a canyon in their carriage and it sort of turned into a flying car and they don’t fall down. There is lots of nice action. The monster made out of stones looks really good and he has really scary teeth.

In the restaurant where Lenny arranges to meet Prince Charming afterwards there’s a bully chef with horns who almost sliced off the prince’s head with a butcher’s knife! That was my favourite joke.

My favourite character was Prince Charming, Lenny saves him a lot though. At the end they are in love and get married.

I can’t remember the songs. The film is exciting though there aren’t many jokes in it but I would probably watch it again.

Watch the Charming trailer and scroll down for images from the movie: