You are here: Home / Film Reviews / Ready Player One (3D) 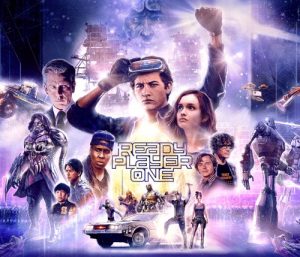 I spent the 90s obsessed with Oasis, though I’ve only played a computer game once and it didn’t end well.

But despite my great age and declining short term memory, I’m not bad on 80s pop culture. With my 8 year old as the representative for modern youth (he’s already helped me take the child lock off the movie channel), I figured between us we could take on Ready Player One.

It’s 2045 and teenage Wade Watts (Tye Sheridan) lives in The Stacks in Columbus, Ohio; literally static caravans piled on top of each other with fire escape stairs and poles to get up and down.

It’s ramshackle and ignored, but as a community it looks rather fun, with people forced through proximity to know their neighbours. Pizzas are delivered by drones, and hopefully the rest of their shopping too, if anyone still eats watermelon.

He’s an orphan, his parents’ deaths possibly as a result of the earlier social upheaval which is briefly mentioned. Now Wade lives with Aunt Alice and her scuzzy boyfriend Rick, played by Ralph Ineson, which I hope is a reference to Finchy from The Office but probably isn’t (though the Stacks may well be America’s own dystopian version of Slough).

Wade spends his days (and nights) in the OASIS, a virtual reality world where people can work and play. The OASIS is a skills-based meritocracy, but a brutal one, where you can lose everything.

His best friend there is mechanic Aech (Lena Waithe), a giant who has made his own Giant, the Iron one, in his workshop. Aech is funny, and cleverer than he seems, though I felt much better about missing some of the film’s references when it turned out he hadn’t seen The Shining.

There are many virtual superstars in the OASIS, and Parzival (Wade’s avatar) is delighted when he finally meets Art3mis (Olivia Cooke). She’s clued up and wary: “you only know what I want you to know, you only see what I want you to see” she tells him, and understands real world consequences. (Art3mis’s look is interesting. Hair swept right up, stylised make-up over each side of her face; the real world woman behind her has a birthmark she covers with a long fringe.)

Halliday’s dead, but he’s left behind a quest to find an Easter egg in the OASIS. The winner – who has to complete three challenges – gets control of Halliday’s entire company.

Halliday’s avatar was called Anorak, a perfect moniker combining clothing nerdiness and fantasy novel character nerdiness. (Rylance is incredibly touching as the lonely inventor, who recorded and published everything about his life but whose challenge, requiring an understanding of the man himself, seems impossible to win. The details of his life behind the clues – his date Karen wanted to go dancing “so we watched a movie” – lay bare how he lived slightly to one side of everyone else.)

Gunters (egg hunters) have been tackling the quest since Halliday’s death but the scoreboard remains empty. Wade’s attempts take him not just through the OASIS but back into real life, to meet his real-world OASIS friends.

A team of grassroots gamers needs a boardroom opponent: Nolan Sorrento (Ben Mendelsohn), CEO of Innovative Online Industries (IOI). He’s middle-aged and out of touch, though he still ventures into the OASIS where his avatar bears a striking (and rather welcome) resemblance to Jon Hamm.

In OASIS he’s assisted by I-ROk (TJ Miller), a hypochondriac giant who witters on about minor health complaints while Sorrento is trying to get him to complete some nefarious deed.

Sorrento may not know his Simon Le Bon from his Buckaroo Banzai, but he doesn’t need to. He has a team of indebted and identically-dressed gamers, 80s film fanatics, and music lovers who back up their encyclopaedic knowledge of popular culture by constantly researching the obscure and the obsolete. Sorrento’s aim is virtual world domination (everyone’s given up on the real one) by winning Halliday’s competition.

The movie is a visual feast, and you don’t have to be a gamer to appreciate it (the only game I play online is Scrabble and that’s because no one in the real world will play it with me). The OASIS action sequences are impressive, though sometimes so frenetic it’s hard to take in the scope of the challenges Wade faces, and still spot the cultural references (climbing Everest with Batman, anybody?)

And next to an army of gamer avatars advancing across frozen wastelands towards a looming castle, the real-world action can look a little tame (though I freely admit I’d be terrified simply sliding down the pole from Wade’s caravan).

It’s easy to overthink when reference-spotting. To me, Parzival looks to be modelled on David Sylvian of 70s/80s pop band Japan, though I doubt that’s intentional. And Halliday’s terrible hair and social uncertainty reminded me of Garth from Wayne’s World; were it not for Rylance’s brilliance as an actor I’d have been struggling to avoid singing Foxy Lady.

Some of the differences between the real life gamers and their OASIS avatars are funny, though characterisation is weak. The ending is a bizarre mix of threat and cartoon. I’m surprised there wasn’t a reference to almost getting away with it were it not for those pesky kids.

Ready Player One is good fun, but it’s overlong at two hours 20 minutes. References are sometimes shoehorned, a pop culture movie version of Billy Joel’s We Didn’t Start The Fire. Who knows, maybe a fan is out there right now trying to find rhymes for Bill And Ted, T-Rex, Duran Duran and Blue Monday.

A creator of worlds, Halliday is seen as a god, though he was anti-rules. He reminds me (when not Garth-ing) of Monty Python’s Brian, encouraging his followers to be individuals only for them to declaim as one that they are all individuals.

“Reality is the only thing that’s real” says Halliday’s hologram, and this is a story about letting people meet the real you (almost certainly nicer than you think, unless you’re a social media troll), and being true to yourself.

But it’s also a paean to real-life love and regret. It’s a truism that love is a common theme in popular culture (though here there’s a twist). But regret is admitted less often. Everyone claims they have no regrets, that everything is a learning experience (as if they are mutually exclusive); something I don’t believe, and which made me like Halliday even more. He’s an incredibly human human.